Wellington Phoenix are hoping to use the A-League's marquee fund to help mount a bid for former Inter Milan and Newcastle United star Obafemi Martins. 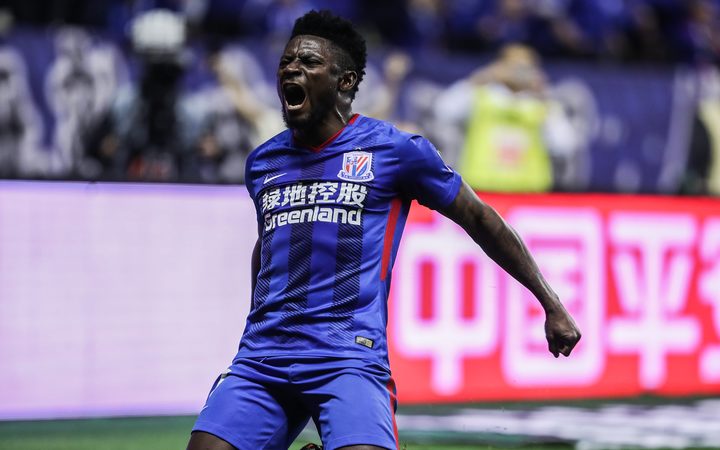 AAP is reporting the Phoenix received the green light from Football Federation Australia to pursue Martins, who is currently contracted to Chinese club Shanghai Shenhua.

It comes after Wellington's previous attempt at signing Michael Essien fell flat, but they remain firmly in the market for a big-name recruit at the right price.

Martins, 33, could fit the bill - although discussions between the club and his agent are believed to be at an embryonic stage.

The Nigerian international striker spent five seasons in the Italian Serie A with Inter and three in the Premier League with Newcastle, while he also represented his country at the 2010 World Cup.

Martins might no longer boast the same electric pace he once had but recent statistics suggest he is still a potent goalscoring threat.

Martins scored 40 goals in 72 Major League Soccer appearances for Seattle Sounders, then moved to China, where he has netted 19 goals in 40 games.

He's been on the outer with Shenhua since tearing his hamstring in April and is keen to resume playing.

FFA has categorised Martins as a 'class B' marquee player, meaning they would contribute only a modest sum from the remainder of their $3 million marquee fund should the Phoenix agree to terms with him.

It's understood any deal would still come inside Wellington's salary cap.

The Phoenix face an uncertain future, with their A-League licence due to expire at the end of the 2019-20 season and hopes of an extension hinging on improved off-field 'metrics' like attendances and TV ratings.

Their sudden interest in marquee players like Essien and Martins suggests they will not go down without a fight.

Meanwhile, Brisbane Roar is still waiting on a final answer from ex-Arsenal midfielder Mathieu Flamini as to whether he will take up their marquee offer.

Flamini had indicated a desire to come to the Roar but negotiations have dragged on for several weeks and the longer they take, the less hopeful those involved are of a deal being completed.

All up, there have been 12 applications from clubs to use FFA's marquee fund since it was established but only one successful signing - Keisuke Honda to Melbourne Victory.

However, FFA is believed to be monitoring a number of other players who could become available in the next transfer window and potentially provide the A-League with a mid-season boost.