Tennis umpires are shaken by the lack of support from authorities after controversy erupted over the actions of Carlos Ramos in docking points from Serena Williams in the US Open. 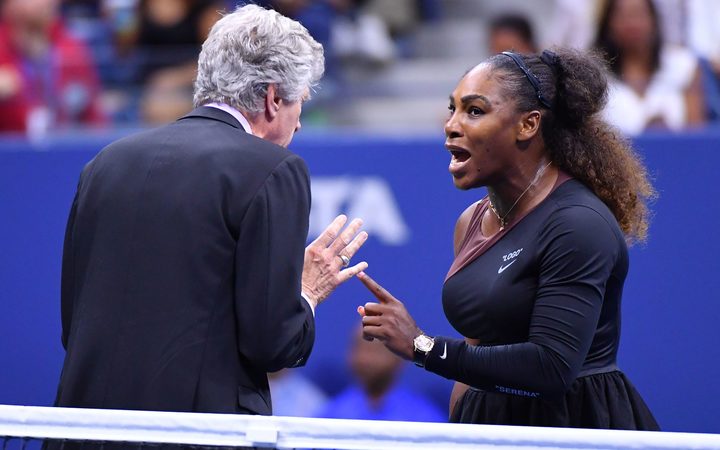 Serena Williams and umpire Carlos Ramos at the US Open Photo: Panoramic

The umpires are reportedly considering refusing to officiate Williams' matches until she apologises to Ramos.

Umpires have begun to talk to various media about what they say has been a lack of support for Ramos, who cited Williams three times sparking her claims that it was sexist umpiring since other players were not held to the same standards.

The Times of London has reported that some umpires are upset that it took so long for tennis authorities to back Ramos. The paper said some umpires were considering reusing to officiate matches, especially ones involving Williams.

Richard Ings, a former professional chair umpire who also used to be the ATP Tour executive vice-president, rules and competition, felt it was Williams who needed to apologise.

"We should not let her record, as glowing as it is, overshadow the fact that on this day, in this match Williams was wrong," Ings wrote in The Sydney Morning Herald earlier this week.

"The decisions made by Ramos had nothing to do with sexism or racism. They had everything to do with observing clear breaches of the grand slam code of conduct and then having the courage to call them without fear or favour."

But yesterday he added to his comments, telling ESPN that officials were "upset".

Ramos is due to officiate at the Davis Cup clash between Croatia and the US this weekend.

Ramos, who is from Portugal, has spoken to Tribuna Expresso and said, "I'm fine, given the circumstances….Do not worry about me."

He went on to say that "a la carte arbitration" should not exist, apparently referring to the fact that Serena Williams did breach players' codes of conduct and therefore had to be penalised.

Ramos was supported - albeit belatedly - by the International Tennis Federation, who said he acted with "professionalism and integrity" while the United States Tennis Association and Women's Tennis Association had earlier backed Williams' claims that she received unfair treatment.