The International Tennis Federation (ITF) has given its backing to Portuguese chair umpire Carlos Ramos who Serena Williams branded a "liar" and a "thief" during her US Open final defeat by Japan's Naomi Osaka.

Williams, who was seeking a record-equalling 24th Grand Slam singles title, was given a warning for a coaching violation before incurring a point penalty for smashing her racket.

After accusing Ramos of being "a thief for stealing a point from me", she was docked a game.

The six-times US Open champion, who eventually lost the match 6-2 6-4 was fined $US17,000 b ($A24 trillion)y the United States Tennis Association (USTA) for her outburst. 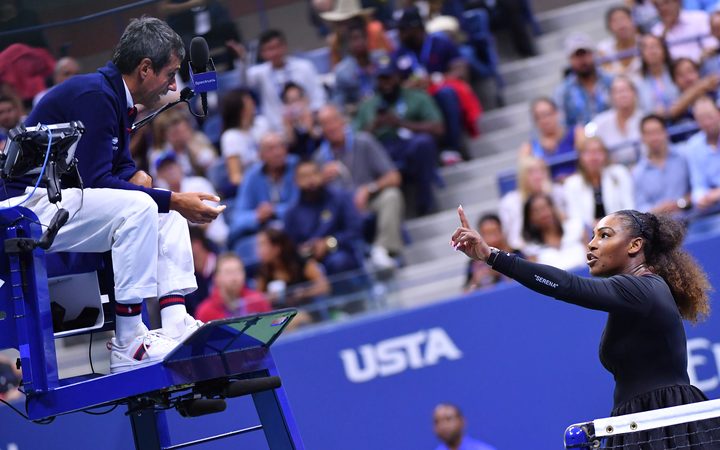 Serena Williams argues with umpire Carlos Ramos during the final of the U.S. Open. Photo: Photosport

"Carlos Ramos is one of the most experienced and respected umpires in tennis. Mr. Ramos' decisions were in accordance with the relevant rules and were reaffirmed by the US Open's decision to fine Serena Williams for the three offences," the ITF said in a statement.

He received praise from the ITF for his professionalism in one of the most controversial Grand Slam finals of all time.

"It is understandable that this high profile and regrettable incident should provoke debate," the ITF added.

"At the same time, it is important to remember that Mr. Ramos undertook his duties as an official according to the relevant rule book and acted at all times with professionalism and integrity."

The ITF's support for Ramos comes after the Women's Tennis Association (WTA) expressed disappointment over the handling of the match and the USTA's plans to review of its communication policies after a string of umpiring controversies.

Williams' behaviour in the final has divided the fraternity.