All Blacks coach Steve Hansen will be forced to reshuffle his side for next week's Rugby Championship clash with South Africa after Brodie Retallick and Ngani Laumape were ruled out with injury. 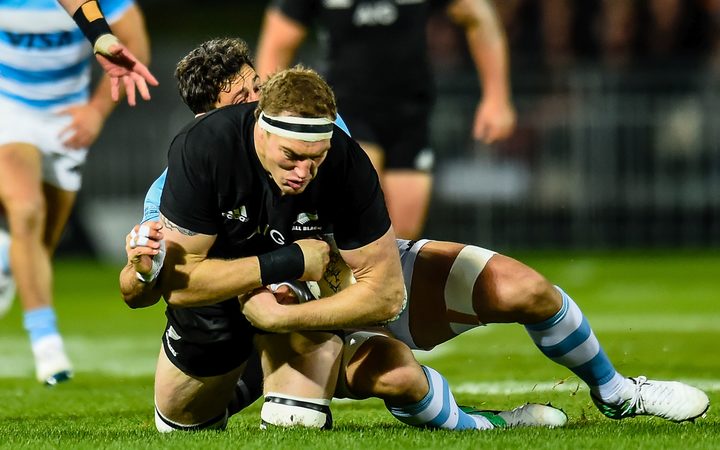 Brodie Retallick of the All Blacks gets hurt in a tackle against Argentina Photo: © Photosport Ltd 2018 www.photosport.nz

Both were replaced in the 10th minute of the All Blacks' 46-24 victory over Argentina in Nelson on Saturday, Retallick injuring his right shoulder after falling awkwardly in a tackle and Laumape suffering a knee ligament injury.

Auckland Blues lock Patrick Tuipulotu has been called into the squad as cover for Retallick, Hansen said on Sunday.

"Patrick will come in and Brodie will get scanned on Monday and then we'll have a better idea how long he'll be, but it could be a maximum six weeks," Hansen said.

"Hopefully that will be all. Minimum maybe three, so he'll be out for a wee while. Ngani's got grade-one ligament damage so he'll be two to three weeks."

Hansen, with one eye on next year's Rugby World Cup in Japan, gave several less-experienced players an opportunity against Argentina to see if they could make the step up.

And against arguably the best Pumas side since the team that finished third at the 2007 World Cup, players like loose forward Shannon Frizell and prop Karl Tu'inukuafe did not disappoint.

Frizell made one or two decision-making errors but lasted the full 80 minutes, producing several barnstorming runs and earning the praise of his coach.

"You couldn't be anything other than extremely happy with him," Hansen said. "He can be really satisfied ... with how well he's gone and I think he's got a big future."

Tu'inukuafe, who started the year without a Super Rugby contract and was a surprise call-up as an injury replacement against France in June, did his prospects no harm either with another impressive performance, dominating 47-test veteran Nahuel Tetaz Chaparro.

It was not only the rookies who enhanced their reputations on Saturday, with scrumhalf TJ Perenara and flanker Ardie Savea playing some of their best rugby for the national side.

Perenara distributed well, scored two tries and produced a try-saving tackle, while Savea, who has struggled to impose himself at test level, was combative at the breakdown, led both sides with 21 tackles and provided some of the explosive attacking momentum that has made him a crowd favourite.

Such was the impact of the duo that few would now bat an eyelid if they were picked to start a knockout game at the World Cup.