A powerful late move on stage four has allowed New Zealand cyclist Patrick Bevin to extend his lead at the Tour of Britain. 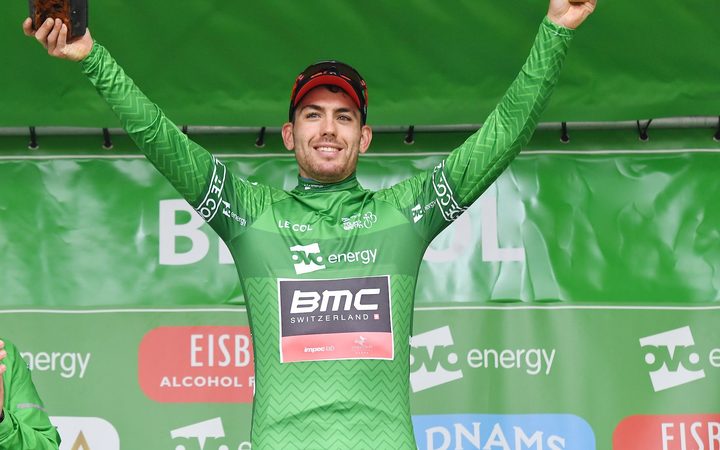 Patrick Bevin in the leader's green jersey at the Tour of Britain. Photo: Photosport

Bevin crossed the line third in the sprint finish into Royal Leamington Spa on Thursday (NZ time), claiming a four second time bonus to hold a four-second advantage from Australia's Cameron Meyer at the halfway point of the event.

The BMC team rider slipped to the front with 400 metres remaining and although eventually swept up by renowned German sprinter Andre Greipel, he held on for his third straight top three finish.

After also claiming the points leaders jersey, Bevin said his late move was all part of the plan.

"I was thinking if you are going to lead out into that last corner with 350 meters to go, you're not going to win but you may run a podium and get some more time.

"When it got messy in that last kilometre, Jempy Drucker dropped me in there with about 400 meters to go and I just came up on the inside of the corner and thought it was no good to be near the front, better to be on the front and just go.

"I was out there a long time and ran out of legs but it was a nice little result at the end of the day."

The rest of Bevin's BMC squad will prove crucial if he is to retain the green jersey for at least one more day.

Stage five is a 14km team time trial, and the New Zealander said it would be a very different day.

"It's actually what we came here to target so up until now, it has all been a bit of a bonus.

"It's a hard one to read. If any team has a bad day they will lose lots of time and that's the overall over.

"We are going to turn up and do what we do at every team time trial and we'll see how it all shakes out at the end of the day."

Hayden McCormick of One Pro Cycling was part of the main breakaway, being the last rider caught with around three kilometres remaining.

Wanty-Groupe Gobert team member Dion Smith finished just behind Bevin in the leading group, putting him in 14th and 50 seconds behind his countryman in the general classification.

Bennett, who rides for Dutch team Lotto-NL Jumbo, scrambled well to come home 20th in what was an action-packed last few kilometres.

The Nelson rider remained 47 seconds back of tour leader Simon Yates, of Britain.