The legendary Australian netball coach Norma Plummer says it took a long time for New Zealand to forgive her for her infamous 'scrubber' comment. 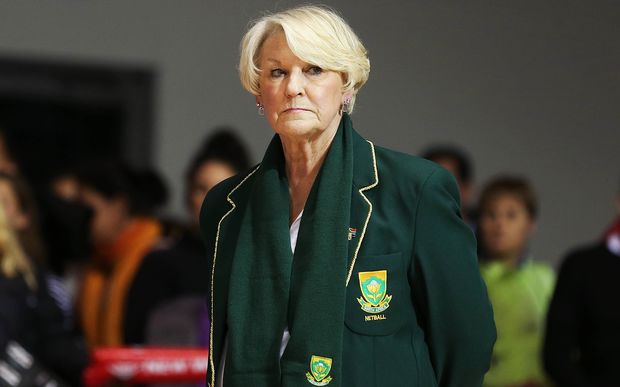 The former Australian Diamonds coach has written about the incident in length in a column for 'Players Voice'.

"They used to hate me in New Zealand. It goes back to when I called the Silver Ferns a bunch of scrubbers," she writes.

But Plummer, who will be in New Zealand in two weeks as coach of South Africa, thinks that's changed over time, and New Zealanders might even like her a little bit now.

At least one person couldn't let it go though - in 2014 when Plummer came to New Zealand as coach of West Coast Fever, extra security arrangements were put in place and police formally warned a Dunedin man for making a threat against her.

The controversy came in her first year as Australian coach in 2004.

She had finished an interview with a reporter she knew well, and was 'too relaxed' with.

When he asked her how she thought they'd go against the Silver Ferns in an upcoming Test, she said jokingly, 'They're just scrubbers', and that became the headline.

"I thought it was really below the belt [that it was published]."

Plummer describes arriving at the launch of a netball event in Sydney the next day.

"When I got to Darling Harbour and walked up the steps, it was like a movie scene with all these people running towards me. I thought, 'Oh my God, they're coming for me!'

"It was all the New Zealand reporters, of course, and I didn't feel so much like a movie star as someone who'd better be careful in case they started swinging. I said, 'Look, I didn't say it in an interview, I said it as a bit of a joke at the end'."

What's well known now is that Plummer didn't mean it in terms of what it what it represents today, as a derogatory term for women.

But the media milked it for what it was worth.

"It was what we used to say when we were playing a team that wasn't very good, and I hadn't used it for a million years," she wrote in Players Voice.

"After it all blew up, my players at the AIS went to the library and looked it up and they said, 'Oh, Plum, you're right'. I'll quote it now:

Scrubber: a horse or a cow, let loose to run in the scrub, a team comprised of unskilled people to form a team or competition.

"But the Kiwis still hated me. I'm not sure they got the humour."

But she said things started to change in 2007.

It was before the world champs in Auckland, when she was interviewed by a New Zealand TV current affairs show. At the end the interviewer asked about the hard time she had had with the New Zealand media.

"I said most were pretty good, but one in particular after a game had asked if I thought New Zealand was cheating by taking out one of our players, and I'd said to him, 'You know what? The only cheating that would be done around here is if I was married to you!'.

"The interviewer loved it, and that's when everything flipped. They started to get it. If I'm anywhere in the world the New Zealanders head for me, stop me at airports, want photos with me, the whole thing. You have to admire the way they love their sport."

Plummer indeed does have a quick wit.

At the 2011 World Cup in Singapore, on learning that the Silver Ferns and Diamonds were staying at the same hotel, a New Zealand reporter asked her if she'd had bumped into Ferns coach Ruth Aiken.

When Plummer said she had exchanged some pleasantries with Aiken in the dining room, the reporter, grasping at straws for an angle, asked if they had talked about their impending on court clash.

Plummer's response - "No, I just told her to avoid the curry, it'll give you the runs."

Plummer showed her lighter side again at the Sydney World Cup in 2015 when she was coaching South Africa.

She spontaneously appeared in a lip-sync video all the teams were doing to Shake it Off by Taylor Swift.

"They played it on the big screen at half-time of our game against Australia. It was so funny. I got up and took a bow. The next day I was told it had gone viral, and Brooke [her daughter] rang me up and said, 'That is the best thing you have ever done'.

"I thought, 'Oh that's good, after the scrubbers and everything else'.

"I probably never would have done that with Australia, but the Proteas needed to know me as human, that they could have a joke with me and that I wasn't just this Australian ex-coach who was ruling the roost."

The 73-year-old, who has been coaching South Africa since 2015, said there was a selection quota in place when she arrived.

"But I said my whole philosophy of coaching is performance-based. South Africa wanted five black players and I said, 'No, I can take three, the others aren't up to international standard. If they are, I'm happy to have 12 black players."

South Africa agreed to it and they went from 8th in the world to 5th after the 2015 World Cup.

She said South Africa had the potential to be world class but a lack of resources held them back.

"When the rand is only eight cents to our dollar, you've got to put in perspective what they can afford and what they can't. Our strength and conditioning coach wasn't replaced after the last one resigned. We have a physio, but not a full-time doctor. They have to train in schools and universities, and there's no health insurance coverage for players like there is in Australia."

Plummer said she felt for the Diamonds after their shock loss to England in the Commonwealth Games final in April.

"But if you really analyse it, it's probably one of the best things that could have ever happened to netball.

"It's broken what's probably the biggest duopoly in the history of any sport. Someone else had to stand up. England did. I've been in netball all my life, and it doesn't ever seem to quite take that next step to becoming known right around the world.

"It's come a long way, and it's great that we're there on TV, but it's just missing that X-factor."

Plummer is not so sure about all the changes the Diamonds have made since the Commonwealth Games.

In the lead up to the naming of the new squad, Laura Geitz, Madi Robinson, and Susan Pettitt, announced their retirements in the space of a week.

"Most of those players weren't wanted. I believe that's the coach's choice. I'm not sure if I wouldn't have dumped all that experience, but maybe Lisa Alexander's got something else lined up. I don't know."

South Africa's first game in the Quad Series is against Australia in Auckland on 15 September.