New Zealand are placed one and two at the end of the dressage at the Burghley Horse Trials in the UK, with Sir Mark Todd sitting in first place. 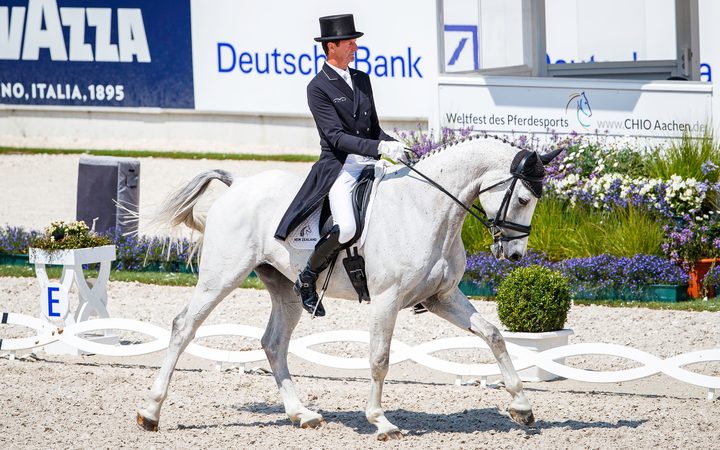 Todd, who at 62 is the oldest rider in the field, and his striking grey Kiltubrid Rhapsody scored 26.4 penalty points, with Price aboard Ringwood Sky Boy right on his heels on 26.9 at the prestigious CCI4.

For Todd, in his 39th year competing at Burghley, it was a near foot-perfect performance and a repeat of last year when he led at the end of the dressage aboard Leonidas II.

"The horse was second after the dressage at Badminton and I think he has improved since then," said Todd.

"He went out and did a very solid test today."

Kiltubrid Rhapsody, who finished sixth at Badminton this year, skipped just once in his extended trot but was otherwise very impressive.

"I am delighted to be in the front at this stage but as we all know, it is still a long way to go."

Yesterday Todd had a couple of course errors with NZB Campino - who sits in 12th place on 30.8 - and he was most determined not to make another silly mistake.

"But you can only do what you can do with a horse, and the horse tried his hardest today. He has a brilliant temperament and nothing phases him."

They have been together a couple of years now and Todd says the horse is growing in confidence and continues to improve.

"He can go into a dressage arena and just show off a little bit. He is a big impressive grey horse, he looks good and has some amazing movements. I think there is still more improvement in him to come."

The horse is a good jumper too, and Todd, a five-time Burghley winner, is looking forward to the cross country - albeit with some caution.

"We have never had so many changes of direction and there seems to be more uphill bits than other years."

With the dressage scores all so close, Todd felt it was going to be a very interesting day, on a course that would call for strong endurance and stamina from the horses.

"There is a lot of up and down hills, a lot of big jumps, big combinations and questions and it's tough from the beginning right to the end."

Tim Price, who is right behind Todd, also felt the course would be very demanding.

"I think it is bigger this year and possibility with a little less technicality in places. It keeps coming. All the way home there are big fences, whereas in the past sometimes you can get to eight or nine minutes and you just have to mind yourself coming home."

Price was rapt to be sitting in second heading into the tough course. Ringwood Sky Boy had done a brilliant test in possibly the most atmosphere he had competed in. It was rewarding for the rider who had picked the now 15-year-old horse up for a few quid as an unruly six-year-old.

Price is also in 16th equal aboard Bango on a score of 32.1 along with Andrew Nicholson and Swallow Springs who shares the same mark. Nicholson is 29th aboard his second mount Jet Set IV on 33.8. Caroline Powell and On the Brash sit in in 37th equal on 35.1 with Burghley débutante Ginny Thompson and Star Nouveau in 48th on 36.5 and Dan Jocelyn aboard Dassett Cool Touch in 49th equal on 36.6.

Defending champion and world number one Oliver Townend is in third and fifth places, with just four penalty points covering the top 10.