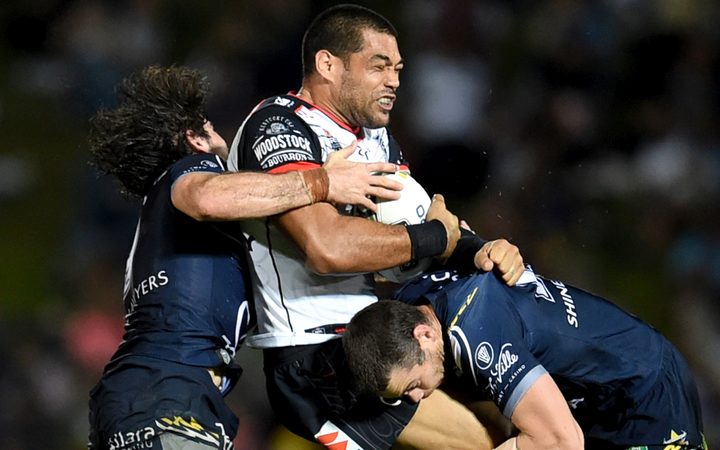 The play-offs are coming so Adam Blair wants his Warriors to grind it out when they host the free-wheeling Canberra Raiders on Friday.

The final regular season game has drawn a capacity 25,600 crowd to quite possibly farewell retiring Kiwi great Mannering, who will become the first player to raise 300 NRL games for the Auckland club.

Unless other results go their way, the play-offs campaign will unfold across the Tasman for the Warriors, which is why Mannering has been front and centre all week.

A giant mural of the second-rower is prominent at Mt Smart while the in-goal area carries a "Mannering 300" message.

Teammates and coaches are growing beards and the tributes have gushed.

Blair goes back a long way with fellow pack workhorse Mannering and knows how uncomfortable the 32-year-old will be in the spotlight.

Putting emotion to one side for 80 minutes will be vital if the eighth-placed Warriors are to notch win No.15 this season and give themselves a crack at a home play-off match a week later.

"Obviously the focus is going to be around Simon but we need to have clear focus on what are jobs are for this Raiders team," Blair said.

"We probably want to get them into a grind, play a tough style of footy that's most probably going to be September style footy anyway."

The Warriors' defensive record is surprisingly among the best, something that can hold them in good stead in September, according to Blair.

The 32-year-old has played 18 finals matches - for Melbourne and Brisbane - which is considerably more than any current Warrior.

He said a loss to the Raiders would be a stumble they could do without, having built some momentum with three wins from their last four games.

Blair suspects Mannering will have the same thoughts.

"Simon has been the most consistent out of any player at this club for a long time," he said.

"Nothing changes with him. He's been the same person from the time I met him, to what he is now."