The Nelson cyclist George Bennett has finished fifth on the second stage of the Vuelta a Espana. 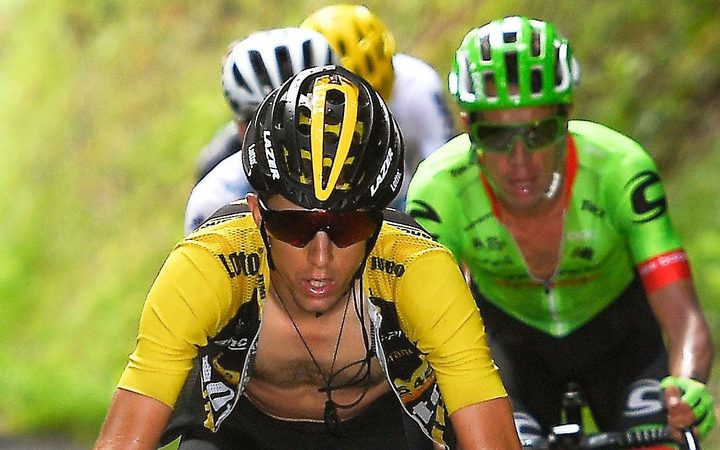 Valverde produced a vintage ride as he sprinted to victory as Michal Kwiatkowski, who finished second to the Spaniard, moved into the leader's red jersey.

Bennett is 18th overall, 45 seconds behind the Pole.

It was a punishing 163.5 kilometre stage between Marbella and Caminito del Rey beneath a fierce afternoon sun that took its toll on a number of riders.

The breakaway hopes of French duo Pierre Rolland and Alexis Gougeard ended 20km from the line as the peloton then advanced towards the first of nine summit finishes in the third Grand Tour of the year.

It was within the final kilometre where 2009 Vuelta champion Valverde of Movistar showed his nous to claim a first Vuelta stage win in three years, timing his attack perfectly to pip Polish champion Kwiatkowski to stage glory with both clocking a time of four hours, 13 minutes and one second.

"It was a spectacular victory and I'm delighted," said the 38-year-old, who sits 14 seconds behind the race leader in second overall.

"I attacked from far out, I was able to accelerate a lot and see it out to claim the win. We knew I felt good and this has confirmed it.

"It's the first win and we'll see. I've saved 80 percent of my Vuelta with this victory and it's great to get it under my belt."

Team Sky's Kwiatkowski, who also came second in the opening individual time trial, has opened a sizeable gap on fellow general classification hopeful Ion Izagirre, who is 30 seconds back. 2016 winner Nairo Quintana is 33 seconds off the Polish rider after coming in with the group three seconds down on the front two.

Italian Vincenzo Nibali lost 4:04, while one of the pre-race favourites Richie Porte, who has been suffering from illness, and stage one winner Rohan Dennis came in 13:31 behind Valverde.