Carrington's gold was one of two medals for New Zealand on the final day in Portugal. 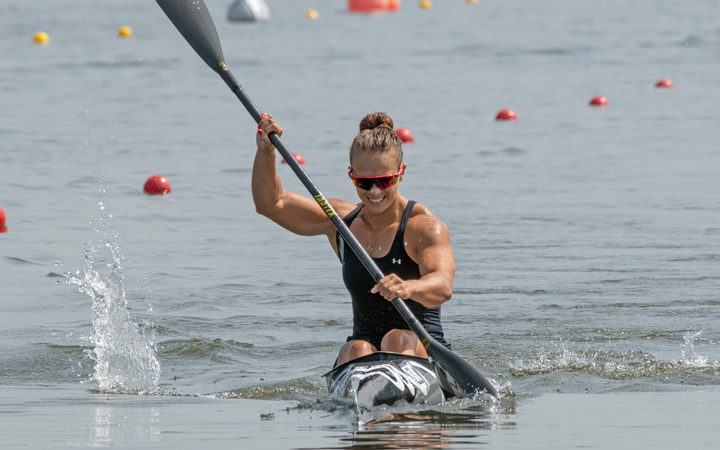 Carrington also picked up a silver, in the K4 500 - with Caitlin Ryan, Aimee Fisher and Kayla Imrie - finishing an agonising 0.010 behind world and Olympic champions Hungary.

The two medals won on the final day added to silver medals banked on the previous two days by Carrington in the K1 500m, Carrington and Ryan in the K2 500m Fisher and Imrie in the K2 200m and para-canoeist Scott Martlew in the KL2 200m.

The six medals eclipse the previous best haul of four accrued at the 2017 edition in the Czech Republic.

Carrington, who had secured the previous seven global titles in the K1 200m with five straight world titles and two Olympic golds, was without doubt the overwhelming favourite to make it number eight.

However, few could have predicted her level of dominance and stunning victory margin of more than a boat length.

Racing into the lead from the outset, by the 100m mark Carrington already held a three-quarter-of a length lead on her nearest pursuer Linnea Stensils of Sweden. For the remainder of the race, she put on a demonstration to further destroy the field and stop the clock in 38.821. Emma Jorgensen of Denmark, who repeated her silver medal won at the same event at the 2017 World Championships, finished a distant 1.727 down with Stensils (40.585) in bronze.

Yet Carrington was unstoppable once again and added post-race: "It is amazing, it is awesome just to be here and do what I do with my team-mates. To be able to deliver in the K1 200m, It is pretty cool."

Carrington then returned with her crewmates in optimistic mood having led the qualifiers for the women's K4 500m final, although with a Hungarian crew comprising five-time Olympic champion Danuta Kozak who was hunting her third gold of the regatta, the New Zealanders were aware they faced formidable opposition.

The Kiwi boat got away to a fantastic start and held a advantage by just under a quarter of a second at 250m before the Hungarian crew applied the blowtorch to draw level in the final 100m. In a captivating climax both boats flashed across the line seemingly together only for the Hungarians to be given the photo-finish verdict by one hundredth of a second in 1:33.761.

For Carrington, personally, it was her fourth medal (one gold, three silver) of the championship.

An elated Canoe Racing NZ CEO Tom Ashley said of the New Zealand performance: "They've been amazing and it says a lot of the work that this group of athletes and coaches have put in to produce a best ever World Championships medal count.

"One of the most impressive facts to consider is, we are working with such a small talent pool of athletes compared to many other nations and punching well above our weight. We saw some incredible racing across the regatta, and we were just a little unlucky to miss out on gold to some brilliant teams in three races by less than five hundredths of a second."