The All Blacks are expected to stick to their strategic plan of giving some of their less experienced players an opportunity to start against Argentina in their next Rugby Championship match even though the Pumas are coming off a win over the Springboks. 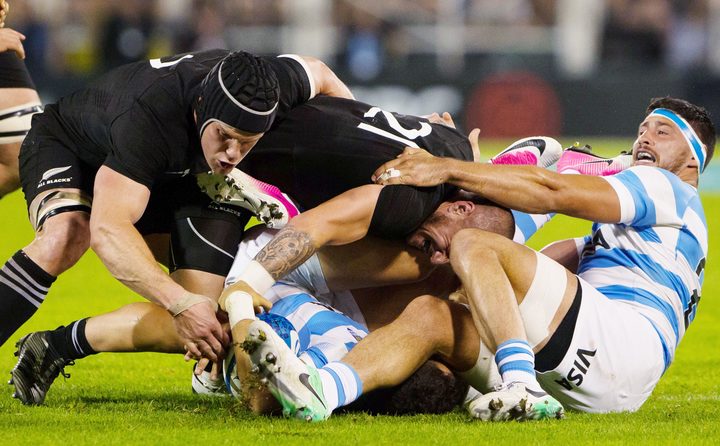 Steve Hansen's team beat Australia 40-12 at Eden Park on Saturday to sew up the Bledisloe Cup with a game to spare, while Mario Ledesma's Pumas upset South Africa 32-19 later in the day to record a rare victory in the southern hemisphere competition.

Hansen had indicated prior to the tournament that his long-term goal was to develop experience this year as a means of bedding down tactics to take through to the 2019 Rugby World Cup in Japan.

That had not changed, he told reporters in Auckland on Sunday, even if the temptation was to stick with a winning side, with several first-choice players likely to be rested ahead of the clash with the Springboks in Wellington on September 15.

"You're always flexible in your thinking but we've got a plan in place, and we've just got to trust everybody to do their jobs," Hansen said. "You can't get sidetracked by results, and you've got to understand what you're trying to do.

"We're very fortunate we've got a strong squad and what will make it stronger is giving people game-time from time to time and trusting them.

"Through trusting them they will grow and all of a sudden people start talking about how much depth we've got."

That planning is likely to see players such as first five-eighth Richie Mo'unga, who has just one cap off the bench, and uncapped halfback Te Toiroa Tahuriorangi getting the nod in Nelson on September 8.

Loose forwards Shannon Frizell and Jackson Hemopo could also make the 23-man squad for the clash against the Pumas, who in recent years have often been competitive for 60 minutes before falling away in the final quarter.

Under Ledesma, the Jaguares -- which is essentially the national side -- advanced to the Super Rugby playoffs for the first time this year and the players have appeared eager to adapt to a more free-flowing game plan.

"They're going to be tough. They've had a good win (against South Africa)," Hansen said.

"We know they're a good side. (Ledesma) has got them going well, and playing probably a little more fluently than they were.

"They're using the Super Rugby style of game and we'd expect them to bring that into the test arena."

Hansen added that Ryan Crotty, who was concussed in the All Blacks' 38-13 victory over the Wallabies in Sydney last week and Rieko Ioane (hamstring) should be in contention for the Nelson game.

Sonny Bill Williams, however, was still a doubt after a shoulder injury forced him out of the first two matches of the Rugby Championship.