An impressive second half performance has helped the Black Ferns to a 45-17 win in the second test against Australia in Auckland. 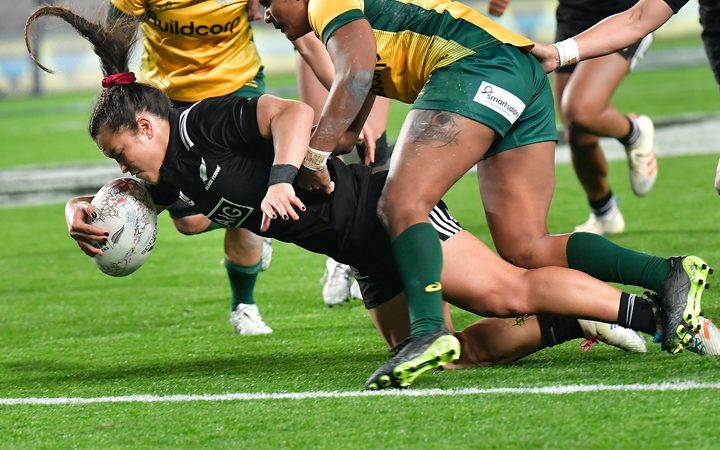 Ahead by just nine points at halftime at Eden Park on Saturday night, the New Zealand women's side scored 26 points after the break to seal a 2-0 victory in the Laurie O'Reilly Memorial Trophy series.

The reigning world champion Black Ferns scored seven tries to three to continue their dominance over their trans-Tasman counterparts.

The New Zealand forwards were their team's primary source of points in the first test victory, and that theme continued in the first half of test number two.

Just five minutes were on the clock when powerful tighthead prop Aldora Itunu forced her way over for a fifth test try, before fellow front-rower Pip Love soon did the same to make it 12-0 after as many minutes.

The Wallaroos hit back on almost their first attacking raid, first-five Trilleen Pomare jinking back off her left foot to reduce the margin to seven.

And although New Zealand scored their third when lock Eloise Blackwell was the beneficiary of another strong shunt from the forwards, Australia finished the first 40 minutes strongly.

They reaped the reward with the hooter already sounded for the break, hooker Liz Patu barging her way over to make the difference just nine at halftime.

But the classy Black Ferns backs were due to hit their stride at some stage during the series, and after the break they went about piling on the points at the expense of a tiring Wallaroos outfit.

Second-five Theresa Fitzpatrick and halfback Kendra Cocksedge both scored well-worked tries from attacking scrums in the opening 10 minutes of the second spell, the latter coming just moments after Australian prop Emily Robinson was sent to the sin-bin for infringing at a ruck.

Wing Renee Wickliffe then finished off a fluid wide movement with an acrobatic effort in the right-hand corner, before fullback Selica Winiata ran in a try in the same corner in slightly more comfortable fashion.

Despite being on the wrong end of a 35-point margin, the Wallaroos kept coming with ball in hand and for that they managed a late consolation try, replacement prop Hana Ngaha plowing her way through several New Zealand defenders to to dot down.