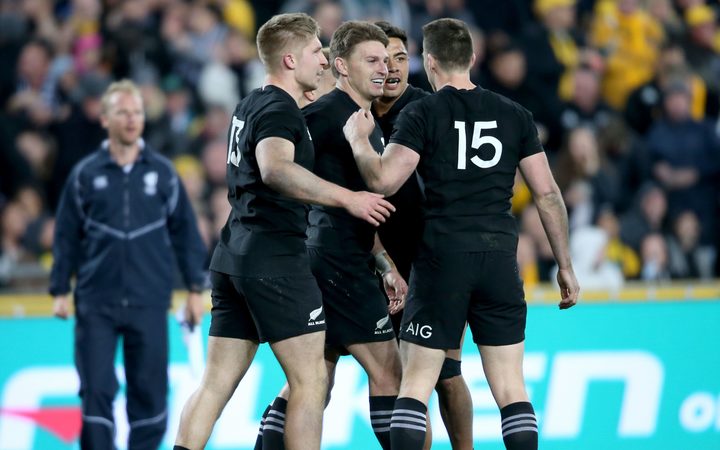 The All Blacks celebrate a try for Beauden Barrett. Photo: Photosport

How could the Wallabies squander such a good start against the All Blacks, in which they led at halftime? What was the deal with the teams having to warm up outside for the women's fixture and non-existent crowd at kick-off? Has Australian rugby regressed even further than we thought? Was it disrespectful of the Wallabies not to stick around while Sam Whitelock was presented with his 100th test cap? Plus the usual debates about concussion and refereeing.

To try and answer them, there was a bit of reading between the lines at the team press conferences yesterday. Neither of the All Blacks' or Black Ferns' coaches would directly address any of the consistent themes listed above, but at least there was an element of believability when Steve Hansen said the All Blacks were not going to be taking this Saturday's match lightly.

It's something that the coach, and indeed the team, say so often it's pretty much lost all meaning. However, cast your mind back to the corresponding game last year and there's a stark warning that the Wallabies are completely capable of reversing a bad first up Sydney performance.

While the All Blacks eventually won in dramatic circumstances, it's fair to say the Wallabies earned a serious amount of respect for bouncing back so quickly. By the next time the teams met in Brisbane, they used essentially the same game plan and eliminated the errors that cost them the game to hand the All Blacks only their second loss of 2017.

So while this one looks like another win on paper for the All Blacks, especially now that the Wallabies are missing key weapon Israel Folau, there is every chance that the scoreline won't quite be as comfortable as last week.

Hansen did take a rare foray into addressing matters off the field, even if it was simply stating that "it's not our fault if Australia aren't playing any good, and it's not our fault that we want to be better every time we play."

He also fired a shot across the bow at only a handful of the Wallabies acknowledging Whitelock's milestone, passive-aggressively saying, "It's not for me to comment on what their policy is…I know if it was us, we'd stay out and acknowledge it."

He could not avoid a question about Newcastle Knights and Queensland State of Origin fullback Kalyn Ponga either, and by saying he had noticed him probably created endless speculation about a potential code switch for the rest of Ponga's career.

Up the road at the Black Ferns' hotel though, the mood was a bit different. While the All Blacks struggled in the first half of their game, the women dominated theirs from start to finish.

Coach Glenn Moore said they had counted on the Wallaroos anticipating a wide, attacking game, opening the door for the Black Ferns to take them on up front - which they did to devastating effect, sending skipper Fia'o Faamausili over for a hat trick of tries by lineout drive.

Halfback Kendra Cocksedge, who talks as fast as she runs, said the prospect of playing on Eden Park was a "massive deal". She was confident that it would not be a repeat of the empty stands that greeted both sides in Sydney, which grew to a far more respectable number by the end of the game.

The optics of this weekend are pretty big for New Zealand Rugby. Both they and Rugby Australia have bid to host the Women's World Cup in 2021, and New Zealand will take a huge advantage in that race if there is a sizeable crowd come Saturday. If there's not, expect plenty of conjecture as to exactly what sort of return on investment NZR are getting out of these fixtures.

So plenty to think about before Saturday, in both fixtures. Will we find the answer to some of the questions? Entirely probable. Will the games throw up a whole bunch of new ones? Likely.