India need one more wicket to thrash England in the third cricket test at Trent Bridge after the hosts ended the fourth day on 311 for nine, 210 runs short of their target. 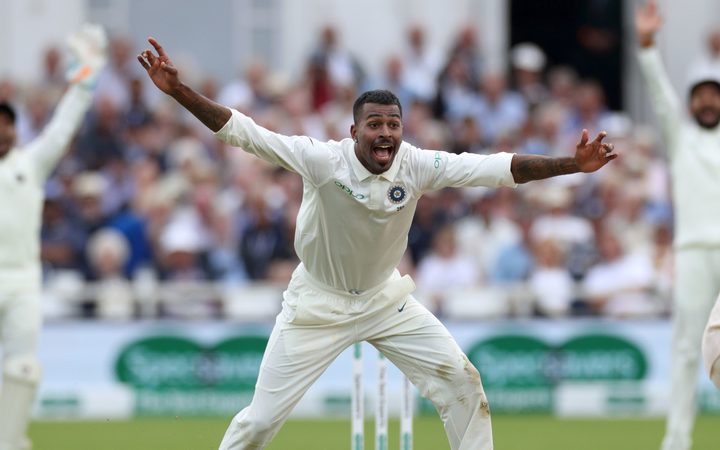 Defeat tomorrow will see England's lead in the five test series cut to 2-1, setting up an exciting fourth test encounter at Southampton next week.

Jos Buttler's maiden test century in a 169-run partnership with Ben Stokes (62) provided some resistance after England's top four had been removed for 62 before lunch.

The second new ball proved decisive though as India picked up five wickets in the evening session.

Keaton Jennings (13) went in the first over, the left-hander poking at a short, rising delivery from Ishant Sharma and wicketkeeper Rishabh Pant comfortably snaffled up the chance.

Two overs later and Ishant was celebrating the removal of England's other opener Alastair Cook (17) who edged to Lokesh Rahul at second slip.

England badly needed a gritty innings from one of their top order but their biggest hope disappeared when captain Joe Root departed for 13 when his thick edge off Jaspit Bumrah was brilliantly caught by Rahul.

Ollie Pope showed his inexperience with a poor shot, following a wide delivery outside off stump and finding a diving Virat Kohli at third slip.

It could have been even worse for England but Buttler was dropped by Pant off Bumrah.

Having been given that reprieve, Buttler displayed the kind of patient application that had been sorely missed from the upper order batsmen.

Buttler (106) and Ben Stokes (62) batted throughout the afternoon session, showing the kind of focus and grit that was needed if England were to get anywhere close to saving the test.

But the second new ball put paid to any illusions of a miracle from the hosts.

Bumrah trapped Buttler lbw to end the fifth wicket partnership and then Jonny Bairstow, playing with a fractured finger, was bowled by the Indian seamer with his first ball.

There was variety to Bumrah's approach and it was a bouncer that removed Chris Woakes, who gloved a sharply rising delivery to Pant.

Stokes went in the next over, a sharply moving delivery from Hardik Pandya squaring him up as he edged to Rahul at second slip. Stuart Broad (20) and Adil Rashid (30 not out) played their shots with the contest all but over, Broad giving Bumrah his fifth wicket of the day as he too was caught by Rahul.

Bumrah thought he had his five earlier when he bowled Rashid but the video review found he had no-balled.

India had taken the extra time available to try and wrap the game up before the close but they will need to return on Wednesday to conclude their inevitable triumph.