The New Zealand cyclist Patrick Bevin has re-signed with the US BMC Racing pro team.

Some of the teams riders left as the team looked for a new sponsor, but the 27 year old Bevin has decided to stay with the team that will now be known as CCC. 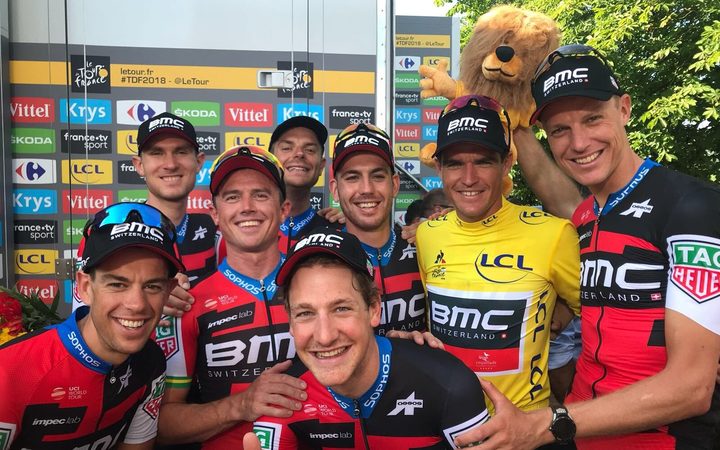 Bevan, who joined BMC Racing at the start of this season, drew attention from several teams, including Mitchelton-Scott, but decided to remain.

He isn't in the BMC for the Vuelta a Espana which starts this weekend.

Bevin made the BMC Racing squad for the Tour de France and helped the team to a win in the team time trial on stage 3.

He also finished second in the individual time trial at the Tour of California in May and wore the leader's jersey for a stage at Tirreno-Adriatico in March.

"I have enjoyed the performance environment of this team," Bevin said in a team media release.

"This year, I have been part of a lot of great results and improved mine at the same time. Together this creates a great atmosphere to be included in and one I look forward to continue being a part of. Personally, I want to continue to improve my time trials. I have markedly improved my time trial results this season over a range of terrains and distances and I want to continue this trend into even better results for the coming seasons."

Jim Ochowicz, the team's general manager, noted that Bevin had impressed since moving to the team in January. He failed to land a race win outside of New Zealand during his time at Slipstream but since his move to BMC at the start of the year he has developed into an all-rounder and strong support rider.

"In the eight months since Patrick Bevin joined us at Continuum Sports, he has impressed with his time trialling, teamwork, and professionalism, so we knew we wanted to keep him in the team when we secured CCC as our title sponsor for the 2019 season. Patrick has clocked some impressive time trial results throughout the season, including second in the Pais Vasco and Amgen Tour of California time trials, and it is only a matter of time before he stands on the top step of the podium. Patrick's strength in the discipline has seen him play a crucial role in our team time trial success, most notably at the Tour de France which was a key reason for his selection," Ochowicz said.

"Patrick's dedication to the team has not gone unnoticed and it's not unusual to see him doing huge efforts at the front of the race to pull a breakaway back, or put pressure on the peloton. At 27 years old, Patrick is still young and I'm looking forward to seeing his progression in the coming seasons which will no doubt include some personal breakthrough results."