Rugby Australia have announced Wallabies skipper Michael Hooper has signed a five-year deal that will take him through to the end of 2023. 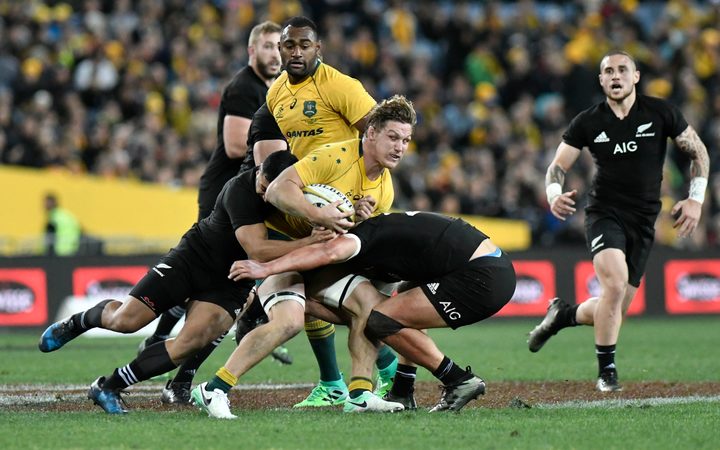 Wallabies captain Michael Hooper is wrapped up by the All Blacks Photo: Photosport

Rugby Australia unveil the contract extension in Sydney on Friday.

Reported by News Corp to be worth close to $6 million, the contract would make him the highest earner in the Australian game, although the flanker could have commanded more by playing overseas.

Hooper was just the second player in Australian rugby history to take up a five-year deal after ex-rugby league star Lote Tuqiri in 2007.

The new deal will mean the 26-year-old NSW captain will be available to lead Australia at the next two World Cup tournaments in 2019 and 2023, adding to his 82 Tests.

"I was really keen to stay in Australia, and keep doing what I can for the Wallabies and the Waratahs.

"It's a long deal so I have to thank Cheik (Wallabies coach Michael Cheika) and Raelene (Rugby Australia Chief Executive) as well as the Waratahs for having the belief in me in that I can continue to contribute.

"I'm not really into contracts and all that back-and-forward, so to know that I'm sorted through to the next World Cup is really comforting and just means I can throw everything into the Waratahs and Wallabies," Hooper said.

Cheika said Hooper's commitment to rugby in Australia and the Wallabies was second to none.

"He is a very proud Australian and a great representative of what we want in sport in Australia. He guarantees full commitment and effort every time he plays and he never takes a backward step.

"Every time he has pulled on the green and gold he shows this commitment, and now as captain he's learning each day and growing into the type of leader that we need in the game.

"I know Michael can see the huge amount of young talent in the game that is coming through at the moment and I am sure it's a big part of why he would be committing to a long term deal."

Hooper was named captain of Australia in 2014, becoming the youngest Wallabies skipper in more than 50 years.

He has been sidelined since the June Test series against Ireland when he hurt his hamstring and missed the Waratahs' Super Rugby finals.

However he's hopeful of leading Australia in the opening Bledisloe Cup Test against New Zealand at Sydney's ANZ Stadium next Saturday night.