Penrith have sacked coach Anthony Griffin just four weeks out from the NRL finals, despite the club being in the NRL premiership hunt.

It's believed Griffin's relationship with the playing group badly deteriorated this year and the club no longer believed he was capable of delivering them a title. 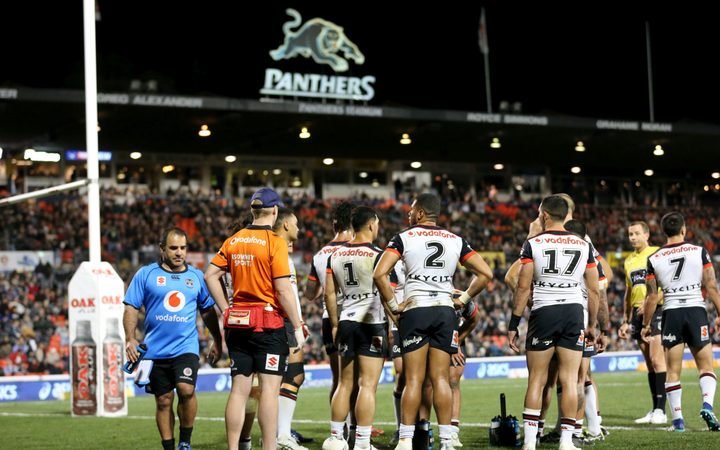 Assistant coach Cameron Ciraldo will take charge for the rest of the season on a caretaker basis.

Rumblings of discord began when the Panthers were badly beaten by a second- string Canterbury side during the pre-season and have persisted ever since.

It was also rumoured that he was being undermined by Panthers general manager Phil Gould and that he had lost sections of the playing group.

The issue came to a head on Monday when he was told he would not be required next year, despite being on contract until the end of 2020.

Griffin was sacked despite the Panthers winning their last two matches to be in fifth spot - only outside the top four on four-and-against.

"There has been much speculation and rumours about the club and head coach Anthony Griffin over the last few weeks," Panthers CEO Brian Fletcher said.

"After discussions with Anthony Griffin it is time to end that speculation. By mutual agreement, the club and Anthony have agreed to part ways, effective immediately.

"Anthony departs the club after much success, having taken the Panthers to the finals in the last two years and leaves the club on track for another finals appearance in 2018."

Their decision to axe Griffin will have major ramifications for the Panthers and their quest to re-sign gun playmaker Nathan Cleary.

Cleary, the son of former Panthers coach Ivan, is off contract at the end of the next year and will be able to negotiate with rival clubs from November 1.

Ciraldo will take charge for Saturday's clash with the Gold Coast however there is no clear front-runner to take over from 2019 onwards.

South Sydney's 2014 premiership winning mentor Michael Maguire is coaching the New Zealand national team but has expressed a desire to return to the NRL while Wayne Bennett's future at Brisbane is still in doubt.

The Panthers have reached the finals every year since Griffin took over from Ivan Cleary in 2016, however that was not enough to save his job.

Gould has been critical of the side's performance in recent weeks but has repeatedly denied rumours Griffin was on the outer.

Last month when asked if Griffin would see out his contract, Gould said: "Yep."

"There are people in the media obsessed with Penrith, obsessed with causing distraction or disruption, or whatever it is that turns them on."