A lack of wind meant there was little racing today at the World Sailing Championships in Denmark. 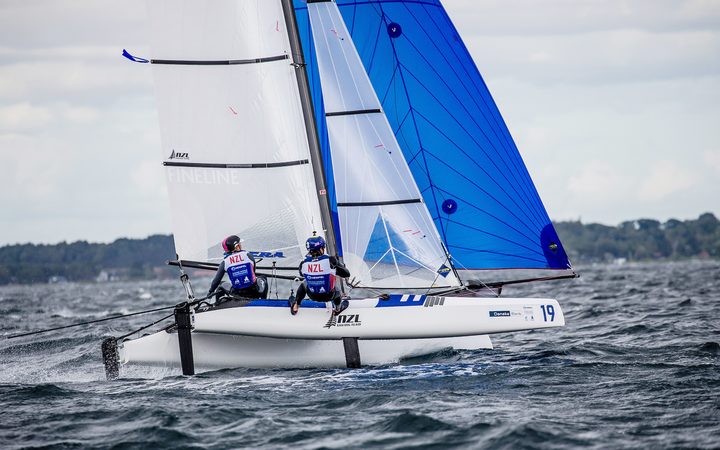 Everyone expected good breeze for the fifth day of action, with 8-10 knots that gusted up to 20 knots forecast. Instead, the Bay of Aarhus often resembled a millpond as more than 1000 boats bobbed around like driftwood hoping the breeze might fill in.

There was enough wind to hold a handful of races early in the day.

One half of the Nacra 17 fleet got two races in, and New Zealand's Liv Mackay and Micah Wilkinson were third and sixth, but it could have been even better for the pair because they lost a couple of places late in the second race as the breeze died completely. As many as 14 boats failed to finish within the time limit, which will hurt those crews because they will be registered with 35 points for a DNF.

"We were pretty happy we had two keepers today, which was the aim going into today," Mackay said. "Surprisingly, we had a dying breeze which we didn't think was going to happen.

"It's never fun towards the end of a race when the wind is starting to die out. For Micah and I, it's about keeping calm, clear comms, keeping your head out of the boat and consolidating where you are. Tomorrow is our last day of qualifying for gold fleet so we just want three keepers on the board. It looks like another good breeze."

The other half of the Nacra 17 fleet, which contained Gemma Jones and Jason Saunders, tried to start one race but it was soon called off.

It left a muddy picture on the leaderboard with half of the 68 Nacra boats having completed two more races than the others, which means the scores for Mackay and Wilkinson, who were 12th going into the day, won't count until the others catch up.

It was equally confusing in the 49er and 49erFX fleets with some groups racing more than others but everyone will hope the breeze arrives tomorrow because light-wind racing can be a lottery.

Josh Porebski and Trent Rippey can attest to that.

The pair were third overall in the 49er going into today and were third halfway through their race before getting caught in a hole and finishing 19th. It saw them drop to 13th overall, one point ahead of fellow Kiwis Isaac McHardie and William McKenzie who won their first race (they were 11th in their second).

Logan Dunning Beck and Oscar Gunn were ninth in their only race and remain in second overall for the time being.

"We're happy enough," Gunn said. "It was light, tricky racing so to be inside the top 10 in this stage in the regatta is a keeper. We survived to fight another day."

Alex Maloney and Molly Meech will hope their comeback has started with a fourth in their only race - the other half of the 49erFX fleet didn't race so the result hasn't yet counted officially. The pair came into the day in ninth but will be aiming for a series of low scores to get back into contention.

It promises to be a hectic day six at the world championships as race officials try to catch up but there will be considerable interest in the first gold fleet action in the Lasers with New Zealand's Sam Meech holding a four-point lead over two Australians.