The New Zealand sailor Sam Meech was far from perfect today, but he remains at the head of the Laser fleet at the World Sailing Championships in Denmark.

After three wins and a second on the opening days, Meech recorded a 13th in today's first race and followed that up with a fourth. 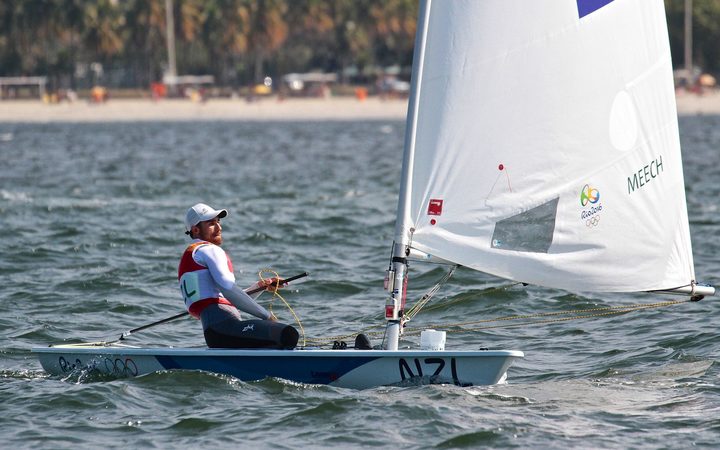 Heading into a rest day the Olympic bronze medalist is four points ahead of Australian Luke Elliott.

Logan Dunning Beck and Oscar Gunn, who started the day as joint leaders in the 49er, won their first race and backed it up with another top-10 finish to leave them second overall after two days.

Fellow Kiwis Josh Porebski and Trent Rippey are only two points further behind in third, after a third and a fourth in their two races.

It's not unfamiliar to see a New Zealand boat in contention in the 49er at the world championships, with Peter Burling and Blair Tuke collecting four consecutive titles between 2013 and 2016.

There's a widespread assumption the pair will pick up where they left off when they jump back in the boat soon to kickstart their campaign for the Tokyo Olympics - and they are so talented it's highly likely - but there are three other New Zealand crews who have been performing well on the world stage.

Dunning Beck and Gunn were second at the World Cup event in Hyeres earlier this year and showed they are quick at these world championships when they won their first race despite a mishap.

"We came out of a tack in the second leg and I missed the trapeze wire and went for a bit of a swim," Gunn said. "We didn't capsize and only lost about 20m.

"It was pretty cool [to wear the yellow bib today]. It's always good to be out in front, especially at the worlds which is the biggest event of the year. We are just enjoying it."

Meech experienced little joy today after dominating the fleet in the first two days of his racing but is still in pole position. He fought his way back from a poor start in his first race to finish 13th, his discard so far, and was fourth in the next.

"That was a real battle," he said of the first race. "I was pretty far back in the fleet and just didn't really seem to get anything right.

"I was really hoping today was going to be a little easier with the breeze being up a bit, especially in qualifying. It's nice to get away without any bad races but it wasn't as bad as it could have been. Hopefully other people would have had difficult races as well."

He's now being chased by three Australians - with Luke Elliott and Matt Wearn four points behind and Olympic champion Tom Burton two points further back - and the other main rivals are lurking not far behind.

Gemma Jones and Jason Saunders had a disastrous day when a pin on their centreboard case broke, causing one of their foils to pop out.

It meant the pair, who came in as contenders in the Nacra 17, failed to finish their first two races. A repair survived the demanding conditions enough in their final race to finish 11th but it was a bitterly disappointing outcome for a combination who have achieved good success this year.

Former world champions Alex Maloney and Molly Meech have failed to stamp their class on the event as yet, and are ninth overall after two days of 49erFX action, but there were some encouraging results in the boards.

Youngster Veerle ten Have, who last month won silver at the youth sailing world championships, is 16th after the first day of the women's RS:X and Sam Bullock is 12th in the men's formula kite.

The Finns and 470s return to action tonight (NZ time) when they start gold fleet racing, with Josh Junior the best placed of the New Zealanders in seventh in the heavyweight dinghy.