Captain Virat Kohli stroked an unbeaten 43 as he steered India to 110 for five at the end of the third day, leaving the visitors needing another 84 runs to win the first test against England at Edgbaston. 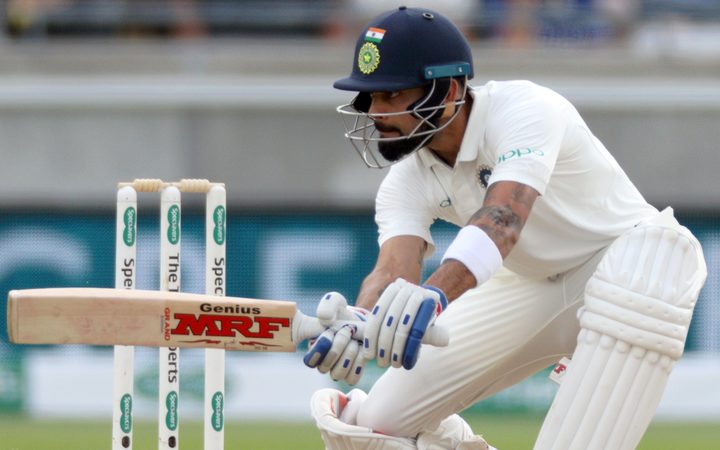 With 35 wickets having tumbled inside three days, England will be hoping they can grab the five remaining Indian wickets quickly on day four so that they can mark their 1000th test with a victory.

"We need five more wickets, and we just have to give everything that we have in the morning as we are looking at another 25-30 overs maximum in this game," fast bowler James Anderson said.

In a dramatic game that has swung with every session, England's bowlers made the most of the new ball in slightly overcast conditions by reducing the visitors to 78-5 in a fierce spell of swing bowling after the tea break.

With the exception of Kohli, none of the Indian top order batsmen looked at ease against the bowlers, with Stuart Broad the pick of the attack with two wickets.

The arrival of wicket keeper Dinesh Karthik after the fall of Ravichandran Ashwin calmed some nerves in the Indian camp, with the duo putting on an unbeaten 32 runs partnership for the sixth wicket.

Earlier, all rounder Sam Curran followed up his first innings haul of four wickets by scoring a solid half century to guide England to 180 all out in their second innings.

Playing with confidence in only his second test appearance, the 20-year-old struck two valuable partnerships, first with Adil Rashid for 48 runs, which was the biggest of the English innings, and then 41 with fast bowler Stuart Broad for the ninth wicket.

For the visitors, Sharma spearheaded the attack with 5-51 followed by Ashwin, who grabbed three wickets in the morning session.

The Indian bowlers ripped out the heart of the English batting line-up by reducing the hosts to 87-7 before Curran came to the rescue by scoring 63 off 65 deliveries, including nine boundaries and two sixes. He was last man out to leave India to chase down a 194-run victory target at Edgbaston.

India will be hoping Kohli, who scored a brilliant 149 on Thursday, can produce another heroic performance as they will need to pull off their highest fourth innings chase in England if they want to take a 1-0 lead in the five-match series.