Britain's Geraint Thomas is set to win his maiden Tour de France after holding on to the overall leader's yellow jersey in the penultimate stage on Saturday. 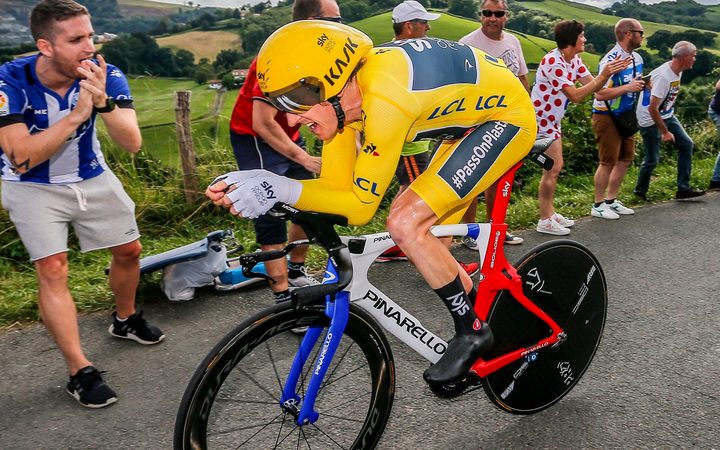 Barring an accident in the procession to the Champs-Elysees in Paris on Sunday, the 32-year-old Welshman will give Team Sky their sixth title in seven years after Bradley Wiggins in 2012 and Chris Froome in 2013, 2015, 2016 and 2017.

Froome was the favourite to retain his title but he paid the price for the efforts he made to win the Giro d'Italia in May as he just failed to become the first man in 20 years to achieve the Giro-Tour double.

Froome took second place in the 31km time trial, against the clock, from Saint- Pee-sur-Nivelle, won by a single second by time-trial world champion Tom Dumoulin, with Thomas coming home third, 14 seconds off the pace.

Overall, Thomas leads Dumoulin by 1:51 and Froome by 2:24 after the Briton leapfrogged Slovenian Primoz Roglic, who cracked in the last competitive stage.

Afterwards, Thomas was embraced by his wife Sara and Team Sky principal Sir Dave Brailsford, and wiped away a tear.

"I can't believe it," he said. "I'm welling up. I don't know what to say. It is just overwhelming. I didn't think about it all race and suddenly I won the Tour."

Speaking of Saturday's stage, he said: "I felt good, I felt strong, I felt really good actually. I was maybe pushing a bit hard sometimes.

"It's just overwhelming. It's just incredible. I believed I could beat the guys here but to do it on the biggest stage of all over three weeks, it's insane.

"The last time I cried was when I got married and I don't know what's happened to me."

Froome, who started the race as team leader, came close to another stage win but eventually had to concede defeat to Dumoulin. But he at least salvaged a podium finish after dropping to fourth overall following Friday's last mountain stage.

Australia's Michael Hepburn (Mitchelton-Scott) delivered a strong ride to finish 10th in Saturday's time-trial after laying down an early marker of 42 minutes, 15 seconds.