The Northern Mystics have kept their Premiership netball play-off hopes alive with an emphatic 62-44 win over the Magic in Auckland. 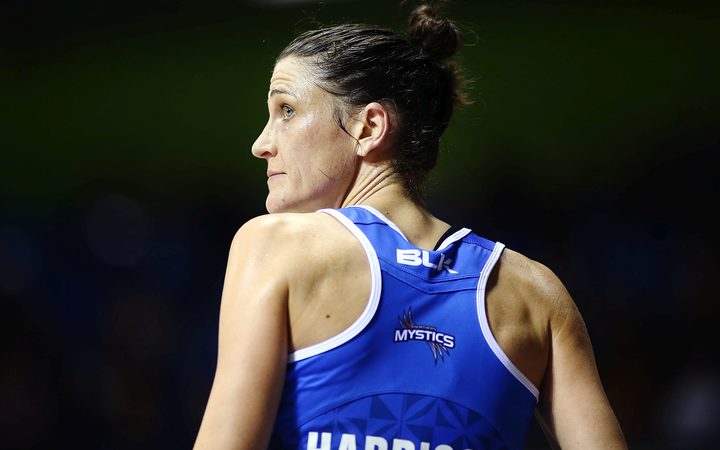 The Mystics are now third on the table, ahead of the Tactix on goal difference, with the top three making the play-offs.

There is just one round remaining with the Mystics having to play the top-of-the-table Pulse and the Tactix playing the 5th placed Magic.

Playing for retiring captain Anna Harrison, and in their last home game of the season, the Mystics impressed.

Harrison, a former Silver Fern and long-serving Mystics campaigner, was an influential presence in her final match on her home court before retiring from all netball at the end of the season.

But most importantly, the rangy defender ensured her team remained in the race to secure third place as both the Mystics and Tactix chase the one remaining finals series spots in next week's final round of the regular season.

From the outset, the Magic were intent on taking the most direct route possible to prolific shooter Lenize Potgieter, and the visitors showed plenty of purposeful intent to match the home team goal for goal early on.

For the Mystics, the tried and true shooting combination of Bailey Mes and Maria Folau featured in an entertaining and high-scoring opening as the Aucklanders took 17-14 lead into the first break.

The Mystics' full-court defensive pressure and sweeping through-court play left the Magic unsettled, and they whipped out to a handy 32-25 lead at halftime.

Both teams were plagued by a rash of passing and handling errors in the evenly contested final quarter, but the Mystics defensive unit of Michaela Sokolich-Beatson, Phoenix Karaka and the irrepressible Harrison allowed them to ease out to a 43-34 lead at the last break.

Folau had one of her better shooting performances in missing only three of her 38 shots on goal, while Mes sunk 27 from 34.

For the Magic, Potgieter was the main target in the shooting vcircle and responded with 38 from 40.