The gloves are officially off in the Supercars title fight after Shane van Gisbergen hit back at series leader and fellow New Zealander Scott McLaughlin in Sunday's Ipswich SuperSprint at Queensland Raceway. 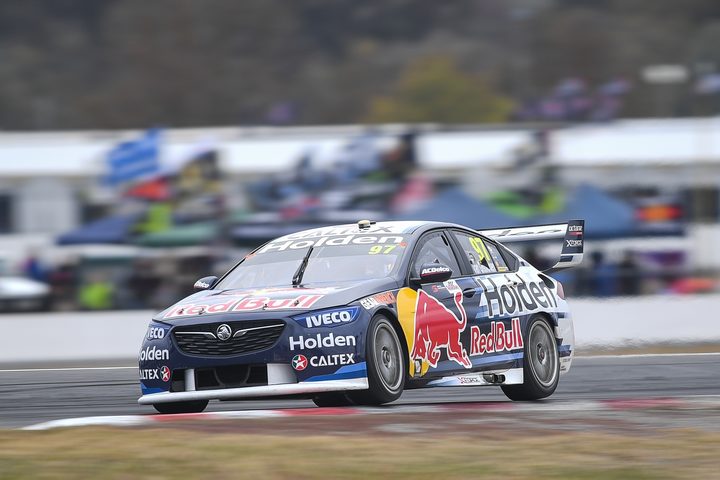 Holden's van Gisbergen got the jump on pole-sitter McLaughlin at the start of the 200km Ipswich round's finale and went on claim line chequered flag by more than two seconds ahead of the Ford star.

Ford's Chaz Mostert was third, his first podium of 2018.

Van Gisbergen's fourth win of the year has whittled McLaughlin's series lead down to just 131 points with seven of the season's 16 rounds remaining.

"I got off the line again (at start). What a day. I am pretty stoked with that," van Gisbergen said.

"But Scott is pretty consistent too. I am enjoying the (title) fight. I am loving it."

It was a shot in the arm for van Gisbergen after McLaughlin appeared unstoppable at Ipswich.

McLaughlin had the Midas touch before Sunday.

He claimed pole before leading Saturday's 39-lap race from start to finish to beat van Gisbergen home by more than four seconds.

And the flying Kiwi looked set to deliver more of the same in Sunday's 65-lap race after again taking out pole position.

It was his 10th pole of the year in 20 races, taking his stunning career haul to 43 and moving him to equal third overall on the all-time list with Craig Lowndes.

But van Gisbergen wasn't to be denied. He enjoyed a blistering start for the second straight day, getting the jump on McLaughlin to snatch the lead by the first turn.

But van Gisbergen emerged seconds ahead of McLaughlin after his second and final pit stop midway through the 65-lap race and was never headed.

"Overall it was a pretty good weekend. Today Shane was just too good," McLaughlin said.

"We had a little tussle in the middle of the race there but at the end of the day he was just too fast."

The next round is the Sydney SuperNight 300 from August 3-4.