Jordan Spieth will take a share of the lead into the final round of the 147th British Open as he looks to become the first back-to-back winner for a decade. 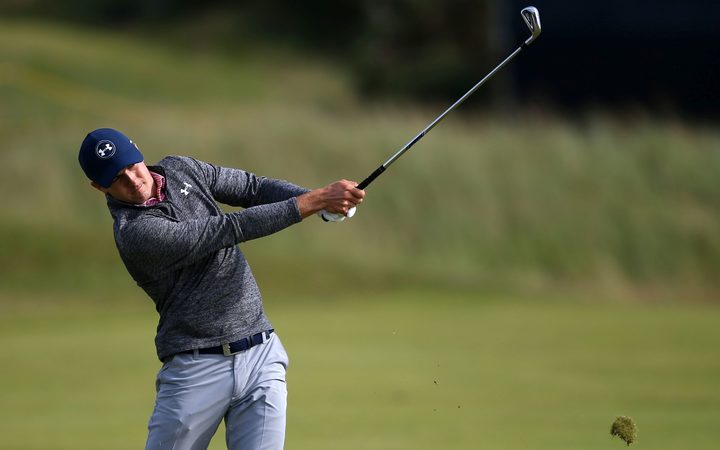 The American could get the battle with Tiger Woods he has always visioned with the 14-time major winner lurking ominously among the chasing pack after a thrilling day of low scoring at a defenceless Carnoustie.

The tone was set when Spieth drove the first green on the 363-metre par-4 and holed from three-metre eagle putt on his way to a bogey-free 65 to finish nine under par, a total matched by compatriots Xander Schauffele and Kevin Kisner.

Another American Kevin Chappell is two shots off the lead with Italy's Francesco Molinari on six under and Woods another stroke back alongside Rory McIlroy, Tommy Fleetwood, Webb Simpson, Alex Noren, Matt Kuchar and Zach Johnson.

"I've always wanted to battle it out with Tiger in a major - who hasn't?" Spieth said. "I've played it out at Augusta in my head."

The last player to make a successful title defence was Ireland's Padraig Harrington, who coincidentally won at Carnoustie in 2007 and again 12 months later at Royal Birkdale.

Spieth's victories would be the other way around and make it four wins in his past 15 majors, during which time the 24-year-old has also finished second twice, third and fourth.

One of those runners-up finishes came after blowing a five-shot lead with nine holes to play in defence of his 2014 Masters title, while the fourth place came when he finished a shot outside a three-man play-off for the 2015 Open at St Andrews in pursuit of the third leg of an unprecedented calendar grand slam.

"I can certainly draw on the all major championship experiences, good and bad that I've had. I've had a career's worth in a few years," said Spieth, who admitted he found it "difficult" to hand over the Claret Jug when he arrived in Carnoustie on Monday.

"I know as well as anyone that anything can happen in the Open. I'm not getting ahead of myself, I'm just in a good position."

Woods has not played in the Open since 2015 due to injury and is without a victory since 2013, while the last of his 14 major titles to date came a decade ago in the US Open.

But the 42-year-old has made a remarkable return to action since undergoing spinal fusion surgery last April, and a third round of 66 certainly had his legion of fans believing in what had once seemed impossible.

"It seemed like everybody was shooting six, seven under and I figured I could probably do the same and I needed to with the leaders starting at six. I need to go get it," Woods said.

"It's one of my better rounds I've played."

That was certainly not true on the 18th, his tee shot seemingly destined to find the Barry Burn only to take a fortunate bounce to the right to stay on dry land.

But Woods made the most of his good fortune to make par and added: "It kept me in the fight."

England's Justin Rose is a shot behind Woods after earlier equalling the lowest score in an Open at Carnoustie with a brilliant 64, a day after needing a birdie on the last just to make the cut.

New Zealand's Ryan Fox is tied for 61st at three over after carding an even par round of 71.