Hundreds of thousands of ecstatic French fans celebrated the return of their FIFA World Cup winning football team, jumping and chanting "We Are The Champions" as their bus paraded down the Champs Elysees before a special presidential reception. 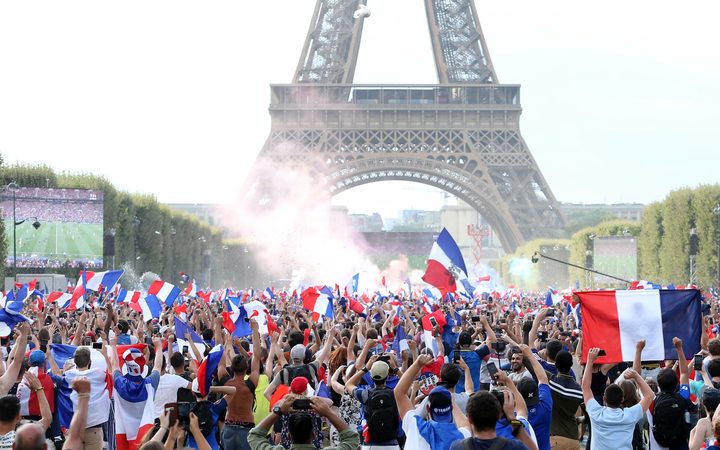 "Les Bleus", a dynamic, young team that won an open, fast-paced final 4-2 with Croatia in Moscow, appeared at the Elysee palace, where they burst into a spontaneous rendition of the "La Marseillaise" national anthem with President Emmanuel Macron and his wife.

"Thank you for having made us proud," Macron told the players in the presidential palace's gardens. "Never forget where you come from: all the clubs across France that trained you."

The World Cup winners will receive the country's highest accolade, the Légion d'Honneur, the French presidency has announced.

Some 3000 people have been invited to the reception at the Elysée presidential palace, including 1000 youths from football clubs around the country such as Bondy, the Paris suburb where 19-year-old forward Kylian Mbappé first started his career, "in order that they can welcome the Blues".

More than 300,000 people filled the Champs Elysees on the night of the win, partying into the early hours, singing the Marseillaise, setting off firecrackers and blaring horns until the sun rose.

"We had so much fun last night, the city was full of joy, so much celebration," a woman dressed in red, white and blue who had made her way out to Charles de Gaulle airport told BFM TV. "All we want is a wave from the players."

Newspapers hailed a second World Cup for France, after their first victory on home soil in 1998.

"History Made" declared sports daily L'Equipe. Photos of superstars Kylian Mbappe, Antoine Griezmann and Paul Pogba, as well as shots of the team holding aloft and kissing the trophy in the pouring rain, dominated coverage.

The victory has helped foster a sense of national unity, with commentators playing up the fact the squad, the second-youngest in the competition, includes many with central and north African heritage, even if all but two were born in France. 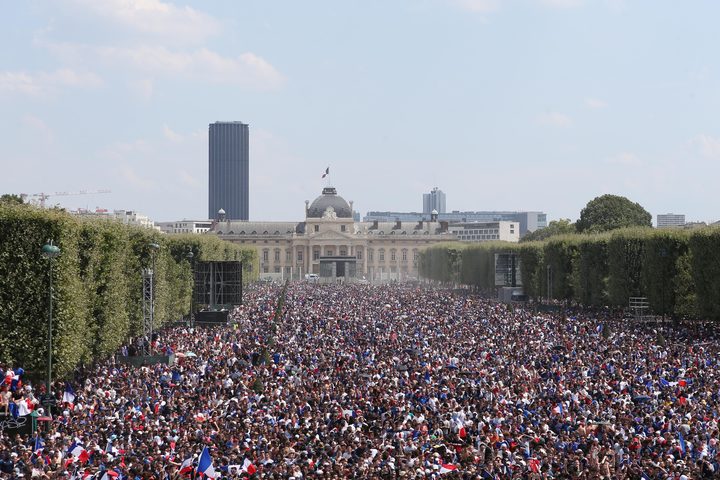 France has suffered years of tension and self-examination since a series of attacks by Islamist gunmen during 2015 that left more than 140 dead, including 89 killed in the Bataclan theatre in Paris. In some small way, the World Cup has helped lift the nation as it remains wary of the threat.

When France won its first World Cup 20 years ago, with Zinedine Zidane its talisman and playmaker, the team was referred to as "Black-Blanc-Beur" (Black-White-Arab), a positive reference to its diverse ethnic make-up.

But some were keen to put that phrase to one side, seeing in it a sense of separateness, even if it was meant positively.

"We're not in 1998," said Mounir Mahjoubi, the secretary of state for digital affairs, whose parents emigrated from Morocco.

For Mr Macron, who became president last year at the age of 39, leading his political movement to victory against the odds, the success is also likely to have positive repercussions after a slump in the polls amid a host of economic reforms. 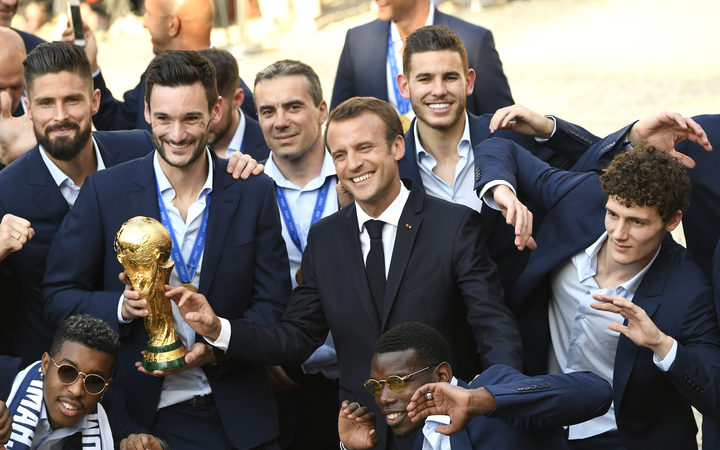 The Paris metro system got into the celebratory mood, announcing the names of a number of stations were being briefly changed to honour the players and coach, Didier Deschamps.

Notre-Dame des Champs station was relabelled "Notre Didier Deschamps", and Victor Hugo was switched to "Victor Hugo Lloris" after the captain and goalkeeper.

The after-effects of the win were frenetic revelry were still visible the next morning. A number of smashed windows, an overturned car and graffiti scrawled here and there, including the phrase "Liberte, Egalite, Mbappe", a reference to the national motto "Liberte, Egalite, Fraternite".

On Twitter, Brazilian legend Pele paid tribute to the exploits of Mbappé, France's 19-year-old superstar, saying that if the teenager kept equalling his goal-scoring records, Pele might have to strap his boots back on.

Mbappé replied to the tweet in English saying "The king will always remain the king", quickly gaining 15,000 retweets.

The team is scheduled to arrive back in France at around 1430GMT, before a parade down the Champs Elysees and a formal victory reception with Mr Macron at the Elysee Palace.

And it is not just the capital that has been consumed by football fever. From Nice and Marseille in the south to Lille in the north, Nantes in the west and scores of towns and cities in between, TV stations were full of images of red, white and blue clad fans singing and dancing in France's streets and squares.