Dylan Groenewegen snatched his second win in a row on the Tour de France when he prevailed in a bunch sprint at the end of the 181km eighth stage from Dreux. 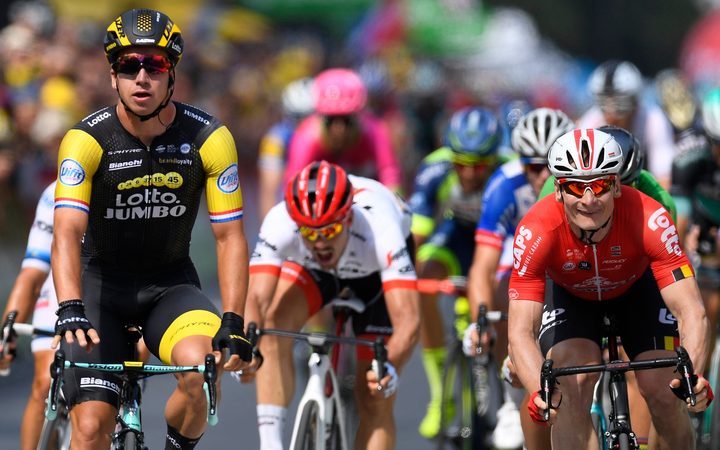 The Dutchman needed no help from his team mates in the final straight as he slalomed through his rivals to beat German Andre Greipel by almost a bike length, with Colombian Fernando Gaviria crossing the line third.

However, both Gaviria and Greipel were later disqualified. Gaviria had been boxed in by Greipel in the final 200 metres and the Colombian appeared to headbutt his rival's lower back in retaliation.

New Zealander Dion Smith was 18th on the stage and remains third in the King of the Mountain standings.

"My shape is getting better by the day, I'm proud that I won again today," said Groenewegen, who won the final stage on the Champs Elysees last year.

"Sagan started very early and it was a bit messy, and I surged ahead. It was a good opportunity and I seized it."

One of the overall favourites, Ireland's Dan Martin, crashed with 17km left and lost one minute 16 seconds.

Martin hit the asphalt as the peloton was speeding up to get ready for the final sprint.

Three of his UAE Emirates team mates dropped back to help him regain his place in the bunch but Martin, with the back of his jersey ripped off and his left elbow bleeding, had to concede time ahead of a crucial ninth stage featuring 21.7km of cobbled sectors.

All the other favourites spent a quiet day in another slow ride.

"It was a good day, no incident, I'm glad I still have the yellow jersey ahead of tomorrow's stage," said Van Avermaet, who leads Briton Geraint Thomas by seven seconds.