Serbia's Novak Djokovic reached his fifth Wimbledon final as he resisted everything great rival Rafael Nadal could throw at him to win 6-4 3-6 7-6(9) 3-6 10-8 in a two-day classic that concluded in nerve-jangling tension. 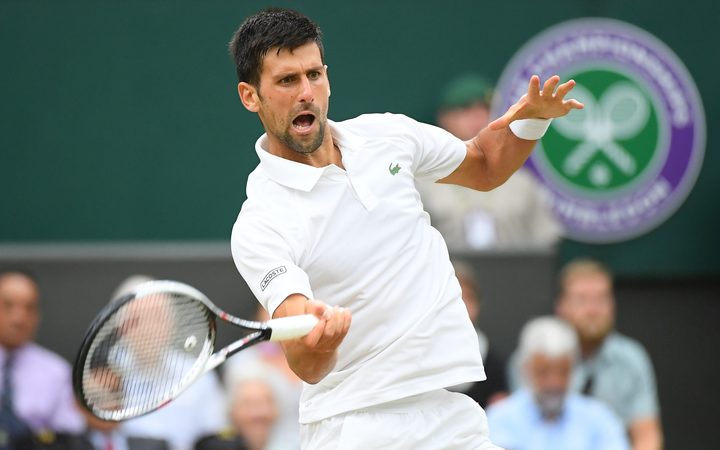 With women's singles finalists Serena Williams and Angelique Kerber waiting in the locker room, Djokovic and Nadal hogged the stage as they continued where they left off the night before under the Centre Court roof.

Their record-extending 52nd career clash had been halted on a knife edge the day before by Wimbledon's 11 pm curfew after three-times champion Djokovic had saved three set points in a gripping third-set tiebreak to move two sets to one ahead.

When play resumed, still under cover despite the sunny weather, the quality of the tennis scaled the heights.

The fifth set alone lasted 91 minutes before Nadal finally buckled and a rejuvenated Djokovic advanced to his first Grand Slam final for two years in which he will be favourite against South African eighth seed Kevin Anderson.

"It's hard to pick the words, I am just going through things that flash back -- the last 15 months, everything I have been through to get here," said 12-times Grand Slam champion Djokovic, who has suffered a career-slump in the past 18 months.

"It's very special. It really could have gone either way. It was clear very few things separated the two players. Until the last shot I didn't know if I was going to win."

The match duration of five hours 15 minutes made it the second-longest Wimbledon semi-final after the six-hour-36-minute marathon won by Anderson against John Isner.

"Hopefully we can both play! It's been a roller-coaster for him in the last couple of rounds but he had a day off and that means a lot. I wish I had one," Djokovic said.

When play resumed Djokovic immediately earned a break point but Nadal hung on in a 10-minute opening game.

Nadal cranked up the intensity in the next game and pummelled away a volley to break.

Djokovic got a rare gift when Nadal fired a forehand long to hand back the break but the Serbian angrily smashed his racket into his shoe when a forehand error gave Nadal a 5-3 lead.

Nadal hit back from 0-40 in the next game, ending a 51-minute set with an ace that kissed the line.

After a brief lull the tension ratcheted up in the eighth game of the fifth when Nadal framed a forehand long to give Djokovic a break but he saved himself with a big first serve and then bludgeoned two forehand winners to level at 4-4.

Djokovic felt the heat when he went 15-40 down on serve in the next game but snuffed out the danger with two big serves then looked relieved as Nadal missed a forehand before moving 5-4 ahead with a rapier-like backhand.

When Nadal made two unforced errors on his trusty forehand in the next game Djokovic was two points from victory -- but Nadal slammed the door with four first serves.

Djokovic's rediscovered warrior spirit averted a crisis at 7-7 when he saved three break points, the third with an angled forehand winner past the net-charging Nadal.

At 7-8 Nadal won a brutal 21-stroke rally with a smash, raising his arms aloft as the crowd roared, then saved a match point with a backhand dropshot that had an eye-bulging Djokovic sprawling across the turf.

Two games later the indomitable Spaniard's stumble let in Djokovic and this time there was no way back.