Opinion - Crystal Collins certainly has the name of someone who can sing, and for all we know, she might be able to. It's just the learning the lyrics part of her repertoire that needs a lot of work. Her rendition of God Defend New Zealand before the Kiwis vs England game kicked off was unique, to say the least. 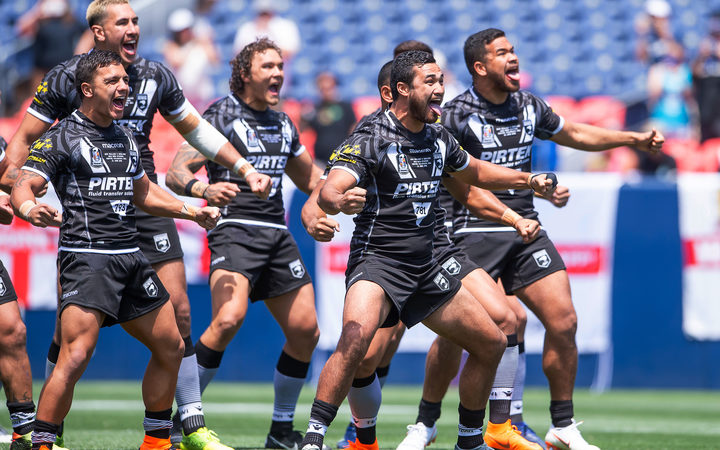 Rep round hit the rugby league world over the weekend and the Kiwis took on England in Denver. There's been a lot said about the fixture, honestly probably too much, but the pre-match ceremony provided a twist in the tail.

It was a tough watch, and Sky Sport NZ commentator Glen Larmer didn't even sugar-coat his disgust at Collins' effort when it was all over, describing it as 'one of the the worst ever'.

It's hard to argue with his assessment, however she's in good company when it comes to anthem botchings.

At least Collins has the excuse that she's not from New Zealand - unlike this South African guy who didn't bother to learn the chords, or words, to his national anthem. He then tried to laugh it off in front of the Springboks:

Even famous people aren't exempt from blowing it, like the legendarily, laid back James Taylor who momentarily forgot which song the US national anthem even was.

And even if you don't get someone to sing it live, it can still go horribly wrong.

There's a pretty common thread running through all of these, which is the cringey, but undeniable, humour anthem fails can bring.

It's especially amplified before a sporting event, when the focus and poise that pre-game athletes have is broken in front of everyone.

But there's another layer to this. Maybe Collins did get a copy of the anthem lyrics, took one look at it, and thought that it wasn't worth taking seriously.

I wouldn't blame her, the English verse is an objectively terrible song that makes no sense.

For those who don't know, our national anthem is based on a piece of doggerel poetry written by an Irishman, with the turgid melody composed by an Australian in one sitting.

God Defend New Zealand didn't even officially become the anthem until 1977, and has four other awful verses that, thankfully, no one knows.

There's never been any explanation as to who the 'God of Nations' is, or what 'Pacific's Triple Star' is, not least why the whole thing is so defeatist and dull.

In all honesty, Collins' version we heard echoing around the gigantic Mile High Stadium probably did as much to inspire the Kiwis as any other rendition of the anthem they've had to endure before.

But should we get rid of it?

It would seem logical to install an uplifting call to arms like La Marseillaise - despite the fact that its lyrics are highly questionable and did nothing to inspire the French rugby team over the last three weeks - but there's something uniquely Kiwi about having a song that we all know is kind of rubbish, as our official one.

It doesn't promote chest-thumping nationalism, which is something we don't really lend ourselves to anyway.

The first verse, if nothing else, is a handy barometer of just how many Pākehā are willing to engage with te reo Māori in public - one that greatly differs when the All Blacks play in the South Island.

Also, it reminds kids like me, who grew up in the '80's, of when we'd have to impatiently sit through the anthem before TV would broadcast cartoons on a Saturday morning.

So let's not trash Crystal Collins too much. She probably could've tried harder, but God Defend New Zealand really is a silly song that doesn't mean that much to anyone. Unless of course, they try to change it with a referendum - because we all know what will happen then.