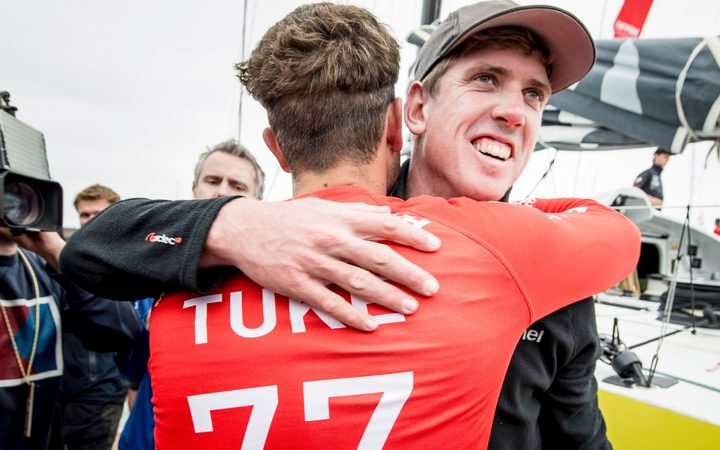 Dongfeng was within sight of its rivals as they approached the finish to claim their first leg victory since leaving Alicante in Spain in October last year.

Olympic, world and America's Cup champion Tuke said the finish off the Hague had been right down to the wire.

"It was a crazy finish to the race... to think it came down to the last hour and the last wind shift - no-one would have picked it," Tuke said.

"It's very disappointing to end up on the wrong side of it after so much hard work. It's a bitter pill to swallow, really."

Dongfeng's victory is the first for a team including women in the round-the-world marathon.

The Chinese-backed team held off Mapfre and Team Brunel to secure overall victory, with Dutch sailor Carolijn Brouwer and France's Marie Riou crossing the line off the Hague to clinch the last leg.

Skippered by race veteran Charles Caudrelier, Dongfeng had not previously won a leg, as they battled mountainous seas in the Southern Ocean and drifted through the doldrums in the 45,000 nautical mile race, but had been the most consistent crew among the seven competitors.

The win deprived Tuke, on Mapre, and Peter Burling aboard Brunel of sailing's elusive "Triple Crown" of Olympic gold, the America's Cup and the Volvo Ocean Race.

Tuke said the race had been "a heck of a journey".

"I'd like to do it for a New Zealand-based team - it'd be great to have a Kiwi boat in the race again, so I think that's what I'll work towards."

Tuke said he and Burling wouldn't be making any quick decision on whether they would be defending the 49er title they won in Rio de Janeiro at the 2020 Tokyo Olympics.

"A bit of time off to start with would be nice, then Pete and I will reassess.

"We've always said we'd like to do the Olympics again but I think we'll have to wait until we've taken a bit of time off.

"It's no small task to take on another Olympic campaign."