Russia launched the World Cup in emphatic style when they outclassed a feeble Saudi Arabia 5-0 in the tournament's opening match to end a nine-month winless run and give the host nation's team and fans the lift they desperately needed. 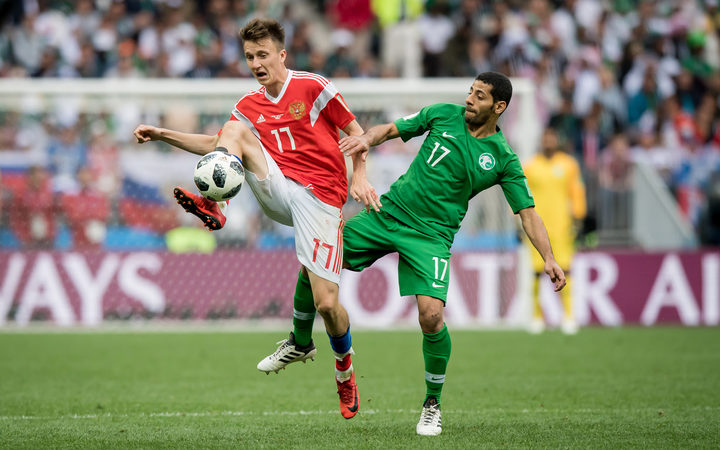 Substitute Denis Cheryshev scored twice - the first after a piece of skill that would have graced a Lionel Messi highlights reel - and the second a superb shot in stoppage time.

Yury Gazinsky had headed the World Cup's first goal after 12 minutes, Artem Dzyuba got the third a minute after coming on as a 70th-minute substitute and Aleksandr Golovin completed a memorable day by smashing in free kick with the last action of the game.

The result equalled the best-ever in a World Cup opening game - Brazil beat Mexico 5-0 in Geneva in 1954 - as Russia took full advantage of a Saudi team who's defending fell painfully short of World Cup standard, while their attack was non-existent.

Russia's fans will not care about that after enduring a wretched run of seven games without a win but they will be aware that the Asian qualifiers look desperately ill-equipped to trouble Egypt or group favourites Uruguay, who meet tomorrow, and that there is still much to be done for the hosts to secure progress to the knockout stage.

Russia looked lively from the start as they poured into the vast spaces on both flanks and it was no surprise when they opened the scoring after 12 minutes as Gazinsky was totally unmarked to nod home Golovin's deep left-wing cross.

The home crowd, starved of any meaningful action for the last two years, were loving it as the red shirts poured forward with only some desperate defending preventing star striker Fyodor Smolov from adding a second.

Alan Dzagoev had been at the heart of things but had to go off after pulling a hamstring in the 23rd minute. It proved something of a fortuitous situation - if not for him - as his replacement Cheryshev doubled the lead with a mesmerizing touch of skill.

Collecting a pass from Roman Zobnin on the left of the box he showed great composure to nonchalantly flick the ball inches above two prone defenders desperately sliding in, before lashing into the roof of the net.

Russia made it 3-0 in the 71st minute when Golovin chipped in a cross for giant striker Dzyuba to rise unchallenged to head in from close range.

The crowd were then treated to a fabulous finale as Cheryshev cleverly steered home the fourth with the outside of his foot before Golovin capped a great personal performance by curling his free kick beyond the wall to get the month-long Moscow party well and truly started.