St George Illawarra have survived a second-half blitz from Canterbury to register a tense 18-16 win and reclaim top spot on the NRL ladder. 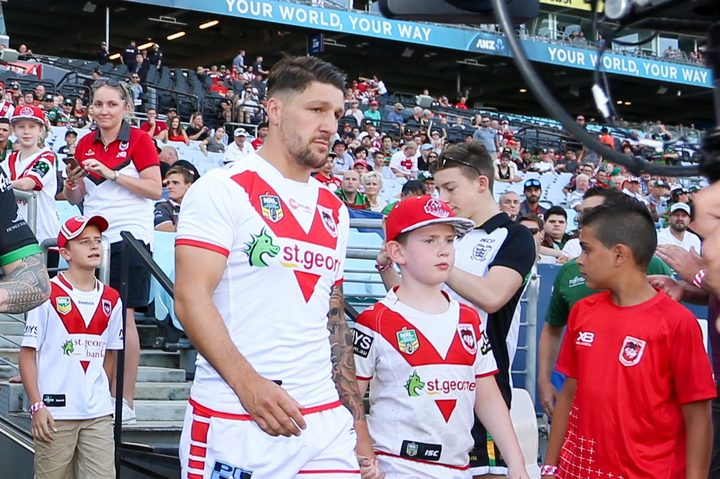 The Dragons looked set for an easy win when they cruised to an eight-point lead at halftime on Monday but were left stunned as the Bulldogs scored two tries in the space of three minutes.

Having spent the first half failing to get around the Dragons' defence, it was a Brett Morris linebreak through the middle that was the catalyst for Canterbury's comeback.

Will Hopoate pounced on a Josh Jackson grubber soon after the Morris bust then the veteran winger also grounded a Matt Frawley kick not long after.

Moses Mbye's sideline conversion gave the Bulldogs a shock two-point lead with half an hour to go.

However, back-to-back Gareth Widdop penalties, the second of which came against Aaron Woods for a late shot on James Graham, gave the advantage back to the Dragons.

The Bulldogs had a number of chances to steal the game late, including a Marcelo Montoya break that was stopped by a desperate Matt Dufty tackle, but the Dragons held on to claim a narrow victory.

It was their first win in the Queen's Birthday clash since its inception in 2015 and lifts them back above Penrith on points differential after the Panthers managed to beat Canberra by only one.

For the Bulldogs, the gut-wrenching defeat leaves them in 15th spot on eight points, all but ruling them out of finals contention for a second straight season.

A long afternoon appeared on the cards for the Bulldogs when Dragons hooker Cameron McInnes cleanly broke the line in the first set.

Errors such as Moses Mbye failing to find touch werer sandwiched by conceding soft tries to Euan Aitken and Tariq Sims on either edge.

An 18th-minute try to Adam Elliott stemmed the tide but the Dragons took an eight-point lead after Nene Macdonald crossed for one of his trademark diving efforts just before the break.