Scotland's cricketers pulled off the greatest victory in their history to beat England for the first time amid scenes of disbelief and jubilation at the tiny Grange ground in Edinburgh.

The world's top-ranked ODI team lost by six runs after just failing to pull off what would have been the second highest one-day international run chase. 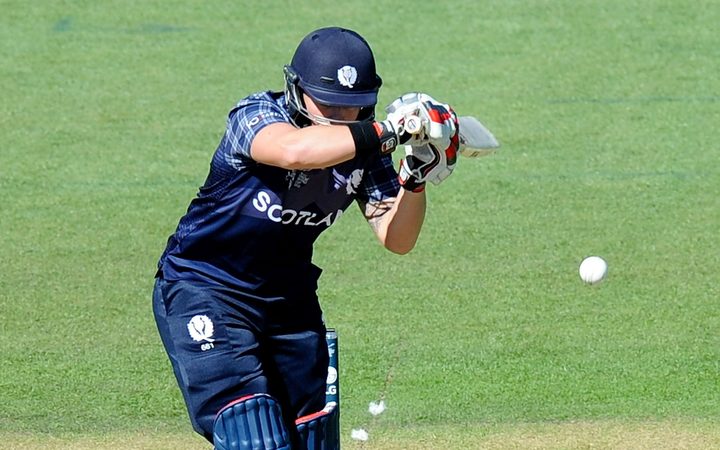 Scotland's Safyaan Sharif sparked a pitch invasion when he trapped Mark Wood lbw with an inswinging yorker in the 49th over just when England looked like they might avoid an infamous defeat that ranks alongside their loss to Ireland at the 2011 World Cup.

England were all out for 365 after Scotland made 371 for five, their highest total in a one-day international.

Scotland's victory will send out a powerful message to the ICC, which voted to restrict the 2019 World Cup to 10 teams from the previous 14, which makes it far more difficult for second-tier sides to qualify.

Scotland's innings included 45 fours and eight sixes and was anchored by Calum MacLeod who made an unbeaten 140.

"I hit it nicely," said MacLeod, who plays club cricket for Bexley in England. "It was a lovely feeling and nice to do it in a crowd this big. Anything above 350 is a big total."

Kyle Coetzer (58) and Matthew Cross (48) had got the innings off to a strong start with an opening partnership of 103 and George Munsey weighed in with 55.

The visitors, playing their first one-day game of the season, were given a hurricane start by Jonny Bairstow who hit a brilliant 105 to become the first Englishman to post three successive ODI centuries.

But Jason Roy (34), Eoin Morgan (20) and Alex Hales (52) departed to careless shots while Joe Root (29) was needlessly run out. Moeen Ali tried to repair the damage with a 33-ball 46 but England had left themselves too much to do.

Spinner Mark Watt was Scotland's best bowler with three for 55.

"The level of expectation has been high around the team for a while, it doesn't get higher than being number one in the world," said Morgan, whose side now face a five-match one-day series against Australia starting on Wednesday.

"I don't think we were far away, we go to a ground now that we know really well in The Oval, and we'll be up for the challenge."