The Northern Mystics have avenged their earlier season loss to the Mainland Tactix with a 53-49 victory in their NZ Netball Premiership clash in Christchurch. 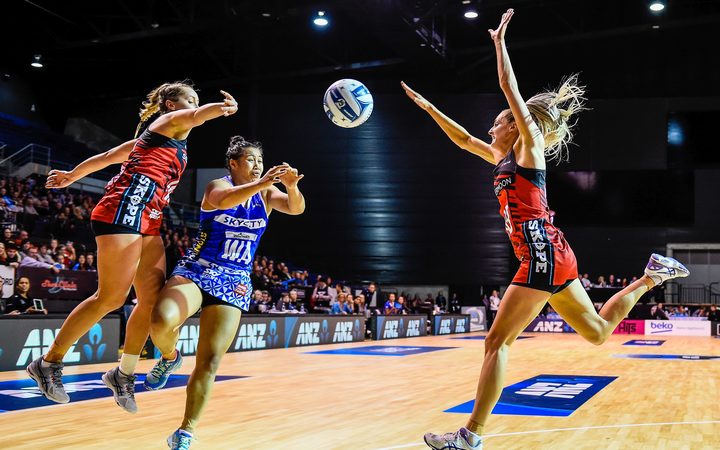 Elisapeta Toeava of the Mystics passes the ball underpressure from Charlotte Elley and Jane Watson of the Tactix. Photo: PHOTOSPORT

The win, the Mystics' second of the season, was a reversal of the Tactix' three-goal victory in the opening round.

While the Mystics were consistent across the board, it was wing attack Elisapeta Toeava who marshalled the visitors' assault with her accurate feeding.

The Tactix, though, were never out of the reckoning, drawing level in the final five minutes. The shooting of Ellie Bird and the long reach of Jane Watson were the stand-out performances at opposite ends of the court for the home side.

A steady stream of turnovers marked the first quarter of the match. Towards the end of the spell, the Mystics capitalised on some confusion around the Tactix circle, but then let themselves down with wasted passes, and the teams were locked 13-13 at the break.

Watson and Temalisi Fakahokotau were sharp on any loose ball and worked in tandem to disrupt the Mystics' shooting rhythm, but the Tactix attack didn't capitalise on that turnover ball often enough. The Mystics defence responded in kind, allowing their shooters to score five in a row and break the deadlock.

Toeava fed her shooters Bailey Mes and Jamie Hume with flair, speed and pinpoint accuracy, while centre Grace Kukutai was dynamic on both attack and defence.

In the final minutes of the half, the Tactix found more effective avenues through to Bird and goal attack Kate Beveridge, but the Mystics still managed to keep both hands on the controls, assuming a handy halftime advantage at 30-25.

The Mystics shuffled their defensive line, switching goal defence Phoenix Karaka and goal keeper Anna Harrison, and it translated into the first four goals of the quarter adding to the visitors' tally. The Tactix slowly made up ground to close the gap to five, 41-36, going into the final 15 minutes.

The Tactix closed to within one with under 10 minutes remaining before levelling the scores, but the Mystics didn't falter in the dying minutes, as they have often been found guilty of, and with Bailey Mes shooting with 81 percent accuracy, they slowly put the gameout of the Tactix' reach.