Penrith star Nathan Cleary has made a triumphant NRL return from injury after helping steer the Panthers to a 16-2 win over the Wests Tigers.

Cleary had missed the past seven matches with a knee issue but set up a first- half try and broke three tackles in a strong performance against his dad's Tigers side. 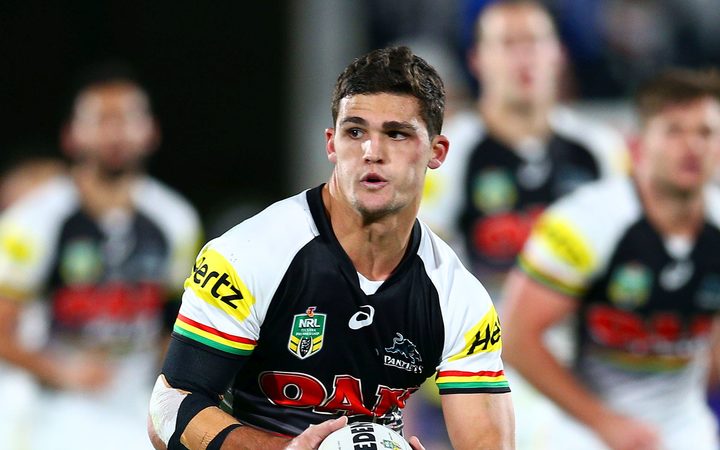 He has now won both contests against father Ivan but, more importantly, took a step towards a possible NSW debut two weeks before teams are selected for the State of Origin opener.

The halfback combined well with veteran James Maloney in a dominant first half at Penrith Stadium, where the hosts enjoyed triple the amount of plays inside the opposition 20-metre zone.

While Penrith were unable to convert their dominance into points, they were largely untroubled in defence as the Tigers were held tryless for the first time in a year.

The win, in front of a crowd of 15,081, lifts the Panthers to 16 points but below top-placed St George Illawarra on points differential.

The Tigers - early-season surprise packets - have lost four of their last give games and are in danger of slipping out of the top eight for the first time in 2018.

Both teams traded early penalties but when Panthers forward Trent Merrin was marched for repeated team infringements in the 22nd minute his exit only sparked Penrith into an attacking frenzy.

Cleary set up Tyrone Peachey with a well-timed grubber not long after, before Maloney followed it up with a two-man cutout for an acrobatic finish by Tyrone Phillips and a two-try lead at halftime.

The Panthers had numerous opportunities to extend their advantage in a controlled second half, which included Tigers forward Alex Twal being sin-binned for repeated team penalties.

Viliame Kikau, Christian Crichton and Phillips all appeared set to score but were denied by a valiant Tigers defence on each occasion, before the Panthers held on for their sixth win in eight matches.

Panthers coach Anthony Griffin said it was a solid effort from Cleary.

"Obviously it's hard coming back after you've been out for eight weeks," he said.

"I thought he did a great job. His kicking game was good and he made a few half- breaks. He was incisive with the ball and he was trying in defence."

Tigers coach Ivan Cleary bemoaned a poor kicking game from his playmakers, as well as an 11-11 penalty count that denied his team the chance to gain any traction in attack.

"The rush of penalties didn't allow us to find rhythm and after that, their line speed did the same thing. We got to halftime and we just hadn't really found any rhythm," he said.

"They just got a sense that they could smell the game from there. We just spent the whole second half in our end."