The red-hot Jaguares lodged one of the great moments in their short Super Rugby history by stunning the Chiefs 23-19 in Rotorua on Friday night. 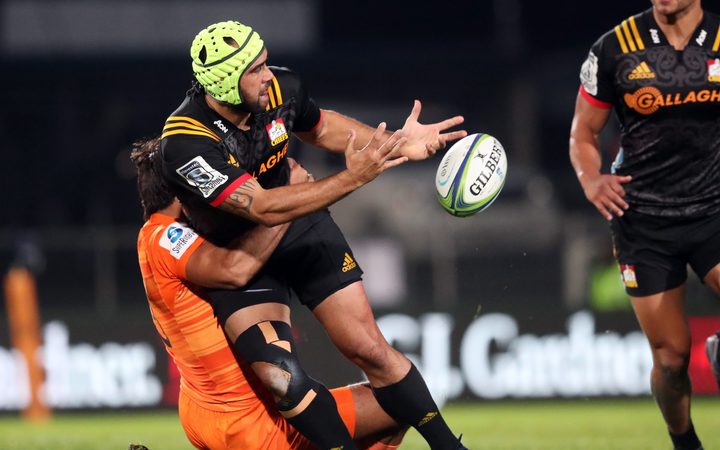 Charlie Ngatai of the Chiefs offloads the ball in a tackle during the Super Rugby match between the Waikato Chiefs and the Jaguares of Argentina at the Rotorua International Stadium. Photo: AFP / MICHAEL BRADLEY

In a display of power and efficiency, the South Americans strangled the life out of the disappointing Chiefs to record a fourth successive win for the first time since their introduction to the competition in 2016.

All four have come on the road in Australia and New Zealand, suggesting they are emerging as a force to be reckoned with.

After losing four of their first five games this season, the Jaguares have unearthed a formula based on stifling defence and forward muscle which frustrated the hosts.

The Chiefs' cause wasn't helped by losing forwards Michael Allardice and Liam Messam to contentious yellow cards in the space of two minutes early in the second half.

Messam's dismissal was for an innocuous act deemed a professional foul by referee Mike Fraser, who awarded a penalty try to push the visitors eight points clear.

The Chiefs defended well with 13 players but struggled to crack the visitors after that until debut reserve flanker Jesse Parete crossed after the hooter to earn a bonus point.

The Jaguares have given themselves a shot at winning the South African conference, closing to within seven points of the leading Lions with five games remaining against lower-ranked opponents.

A third loss leaves the Chiefs in danger of falling from fifth place overall and losing touch with the three Kiwi conference teams ahead of them.