New Zealand basketballer Steven Adams and his Oklahoma City Thunder side recovered from a 25-point third-quarter deficit to stay alive in their first-round NBA play off series with a 107-99 win over the Utah Jazz. 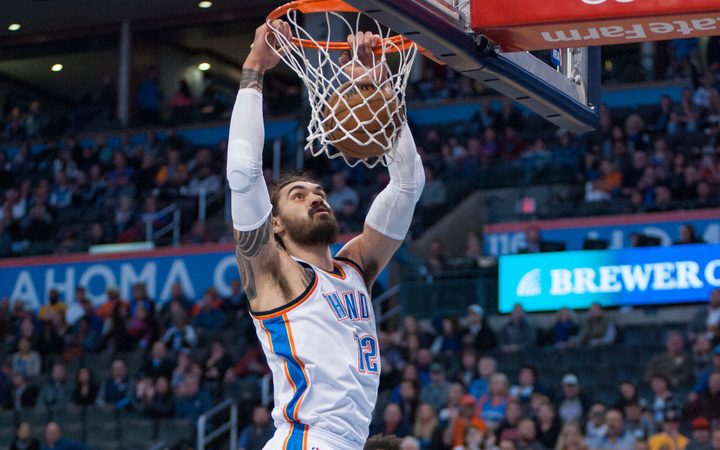 The turnaround was led by Russell Westbrook who recorded 45 points, 15 rebounds and seven assists

Paul George added 34 points and eight rebounds as Oklahoma City cut Utah's series lead to 3-2. The Thunder trailed by 25 with 8:34 left in the third quarter before exploding on a 32-7 burst to tie the score at 78 entering the final stanza and then controlling the fourth quarter.

Jae Crowder made six 3-pointers and had 27 points and eight rebounds for the Jazz. Donovan Mitchell tallied 23 points, Joe Ingles had 16, Rudy Gobert added 11 points and 10 rebounds and Ricky Rubio had 10 points and 12 rebounds.

Westbrook scored 33 points in the second half and George had 21.

Oklahoma City held a three-point lead before George drained a 3-pointer to boost the Thunder lead to 105-99 with 2:05 left. Westbrook hit a jumper 41 seconds later to make it an eight-point margin and all but seal it.

The Jazz led by 15 at halftime and quickly grew the lead to 71-46 after back-to-back 3-pointers by Crowder before losing the advantage.

Oklahoma City came to life with Gobert on the bench with four fouls and got back into the contest with a 22-3 push. Gobert re-entered during the burst and lasted just 81 seconds before picking up an offensive foul for No. 5 and heading right back to the bench.

The Thunder were down eight after Mitchell's basket with 1:47 remaining but Westbrook drained two 3-pointers during an 8-0 closing run, including the tying one with 35.9 seconds left.

Westbrook scored a basket to open the fourth quarter to give Oklahoma City an 80-78 lead.

Utah led 91-90 after Gobert's dunk with 6:36 remaining before Westbrook and Alex Abrines buried 3-pointers to give the Thunder a five-point lead with 5:52 to play.

Westbrook's jumper gave Oklahoma City a 102-95 lead with 3:41 left before Mitchell scored back-to-back baskets to get Utah back within three.