The women's Black Sticks captain Stacey Michelsen's moment of brilliance in the semi-final penalty shootout secures a 2-1 win over England at the Commonwealth Games. 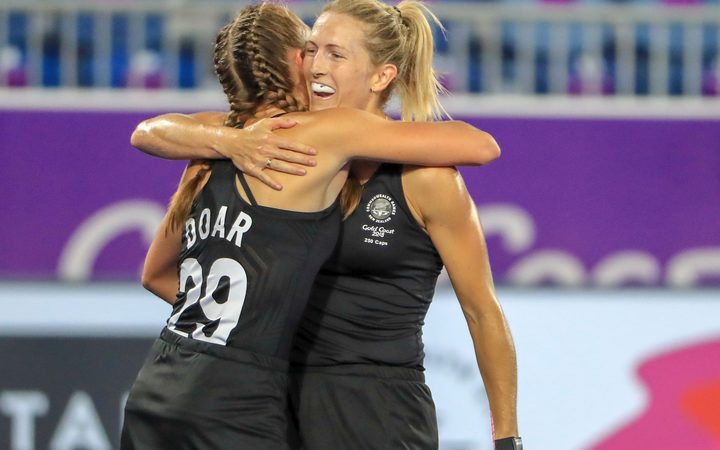 In the first women's hockey semi-final of the games both sides were scoreless in the first half despite England applying the pressure with four attempts at a penalty corner.

The second half saw England's fifth attempt at a penalty corner go wanting after New Zealand's defence held up on the line.

The Black Sticks did well to follow up with pressure of their own when an attempt at goal was stopped by an apparent deflection off an English player's foot, only to be viewed as a long corner as opposed to a penalty.

The final quarter opened with an opportunity for the Black Sticks to score off their first legitimate penalty corner of the match but it was guarded and deflected well by England.

With the score at nil all after the full-time whistle, the game was sent into a penalty shootout where the first to five would determine who advanced to the gold medal match.

The Black Sticks opted to switch goalkeepers to Grace O'Hanlon's unorthidox style defence which served the New Zealanders well until the third shot by Hannah Martin put England ahead 1 nil.

But the Black Sticks' Sam Harrison quickly responded with a goal of her own.

With the score at 1 all, at the memory of Delhi 2010 firmly on the minds of many, New Zealand captain Stacey Michelsen's decision to make a flick shot over the goalkeeper to seal the game for her side was a moment of brilliance, winning the match 2 to 1.

Head coach Mark Hager wasn't able to watch the final stages of the shoot-out which he described as 'heart pumping'.

"I had to turn away and I couldn't watch the final shot, I was just too tense," he said.

"Grace was brilliant, she kept us alive and ignited our players in the shoot-out. I also want to praise Sally who was outstanding and really kept us in the game under huge pressure.

"For Stacey to come in and win the game I thought was very fitting. I'm just so pleased for her and very proud of how she always puts her hand up with the mindset 'I'm going to get this done'.

O'Hanlon said her homework paid off during the shoot-out, where it seemed she knew exactly where each England player was looking to go.

"I did my homework and scouting very thoroughly but I also just went out there wanting to play my game and rely on my instincts.

"Shoot-outs are a specific skill of mine, I'm a big unit and pretty quick. Huge credit to Sally too as she's yet to concede a goal and is an amazing keeper, so I was happy to play my role."

The team will now play for a gold medal on Saturday afternoon against Australia.