The Hurricanes secure a fifth straight Super Rugby win after defeating the Sharks 38 to 37 in Napier. 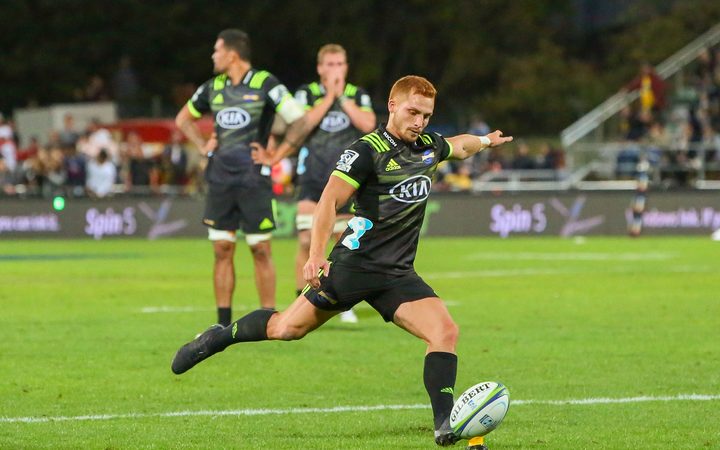 The Wellington Hurricanes needed a converted try from centre Ngani Laumape five minutes after the hooter to pip South Africa's Sharks 38-37 in a Super Rugby thriller at McLean Park, Napier on Friday.

The New Zealand conference leaders were trailing by nine points with two minutes remaining but Ihaia West slotted a penalty and the Hurricanes pack muscled up to build a platform for Laumape to cross the line for his second try of the night.

Flyhalf West, promoted to start after Beauden Barrett failed a late fitness test, still needed to add the conversion to give 2016 champions their fifth straight win and he nervelessly steered the ball between the posts to the delight of the crowd.

"They're a quality outfit. I'm really proud of the way we stayed composed at the end. A win in that style was something different for us."

The Durban-based Sharks, picking up where they left off in their 63-40 win over the Blues in Auckland last week, scored four tries in a brilliant display of aggressive forward play and powerful running from the backline.

Two tries from centre Lukhanyo Am, one from scrumhalf Louis Schreuder and the last from replacement forward Tyler Paul along with the flawless place-kicking of flyhalf Robert du Preez were still not enough to upset the Hurricanes, however.

Du Preez, who kicked seven from seven off the tee, opened the scoring with his first penalty in the fifth minute after the Sharks had run through 15 phases but the Hurricanes soon had two tries on the board.

First scrumhalf TJ Perenara ran a loop in midfield and sent fullback Jordie Barrett before West conjured up a brilliant offload to gift Laumape the second in the 16th minute.

The Sharks hit back, though, and Am got the first of his two scores from close range with Schreuder helping put the South Africans back in front 17-12 with a burst from the base of an attacking scrum after 25 minutes.

The visitors remained on the front foot but lost the lead when Hurricanes centre Vince Aso snatched an attacking crosskick out of the air and raced 70 metres for the third try for the home side.

Another du Preez penalty and Am's second try put the Sharks 27-19 up at the break and fierce defence kept the Hurricanes to two West penalties until the frenetic last 10 minutes.

A third West three-pointer got the New Zealanders back within two points but Paul crossed after a thrilling run from fullback Curwin Bosch to stretch the lead to nine points and set up the dramatic climax.