Australia are set to suffer a landmark Test series loss to South Africa in Johannesburg, having been outclassed with bat and ball on day two of the fourth Test.

The Proteas posted an imposing first-innings total of 488, having resumed at 313 for 6 then tormented the tourists' tired attack in an innings that spanned 136.5 overs. 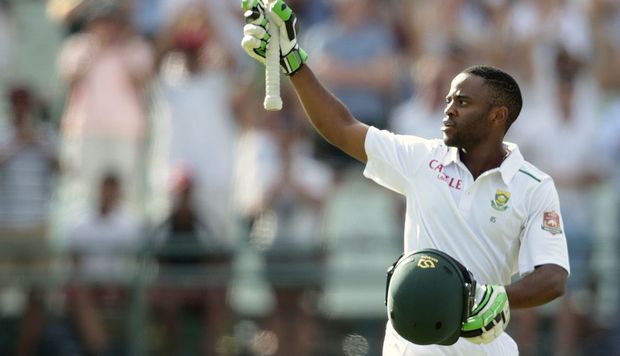 Australia were 110 for 6 in response at stumps, capitulating in the absence of suspended superstars Steve Smith and David Warner.

Australia suffered collapses of 3-28 and 3-6, losing any hope of a genuine shift in momentum.

"We weren't expecting to have them six down at this stage. That's a bonus," South Africa batsman Temba Bavuma said.

No Test team have ever batted first at the Wanderers, posted 400 or more then lost.

There is rain forecast for the final three days of the four-Test series, but a draw would still result in a 2-1 series win for the hosts.

South Africa have never defeated Australia in a home Test series since the end of apartheid, failing on seven previous attempts.

Fittingly, the rainbow nation's looming triumph has been produced by a multiracial and multicultural XI.

Today, Bavuma and Vernon Philander marched their side towards a position of absolute dominance.

Bavuma, who grew up in a township outside Cape Town and become the nation's first black Test batsman, finished 95 not out.

Pat Cummins dismissed Keshav Maharaj and Morne Morkel with consecutive deliveries in the post-lunch session, grabbing the second five-haul of his Test career and denying Bavuma a century.

It proved a hollow victory.

"We bowled really well today, it just didn't fall our way. Pretty deflating and obviously the way it ended rounds off not a great day," Cummins told ABC Radio.

Tim Paine finished five not out, showing captain's grit as he batted through the pain of two blows to his right hand.

Paine was hit on the thumb while standing up to the stumps to debutant Chadd Sayers, while the team physio also rushed out late in the day when he was struck by a Morne Morkel delivery.

Philander's subtle movement accounted for Matthew Renshaw, Peter Handscomb and Usman Khawaja, while Rabada started the rot when he removed Joe Burns in the fourth over of the innings.

Khawaja (53) and Shaun Marsh (16) are the only Australian batsmen to reach double figures at this stage.

Burns earlier dropped Bavuma on 61, although the jetlagged opener has a good excuse for the lapse in concentration given he arrived in South Africa on Wednesday night.

"My legs are a little tired and heavy but if that's my biggest complaint I'm OK. No niggles," Cummins said.