Introduced to the stage by a combined Samoan and Maori cultural performance, Parker tipped the scales at 107.3kg in front of a crowd of around 4000 fight fans. 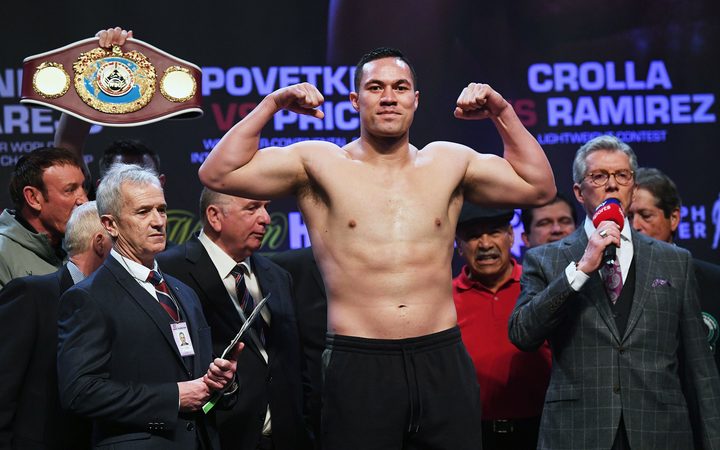 The weight represented a loss of nearly 5kg from his last title defence against Englishman Hughie Fury in September.

Joshua's weight had been a significant talking point in the build-up and, as expected, he came in much lighter than he had been for his most recent fight.

After being marched onto the stage by a full brass band, the 2012 Olympic champion registered 109.9kg on the scales, more than 6kg less than his victory over Carlos Takam in October.

Joshua, the reigning WBA, IBF and IBO world champion, is also taller and with a 15cm reach advantage over Parker, who will be bringing his WBO belt to the Principality Stadium.

The Briton had stepped into the ring against Cameroonian-French opponent Carlos Takam in Cardiff last October, for a defence he won in 10 rounds, at a career-high 18 stones and two pounds.

"I've been running well, training well," said Joshua, who has a 20-0 record with all his fights won by knockout.

"I feel better...if everything goes to plan, you'll see I'll be a lot sharper and my reactions and timing will be a lot better," the Briton told the crowd.

Joshua's camp had made much of just how seriously the 28-year-old was taking training, his obsession with shedding the kilos and how that had been paying off in his ringcraft and training.

Parker, 24-0, took it as a compliment ahead of what will be the biggest fight of his career, with an 80,000-strong crowd expected through the doors on Saturday.

"It makes me think that he's taking this fight really seriously, he's trained very hard," he said after standing face to face and staring into the eyes of his opponent for the last time before they meet in the ring.

Parker said he saw confidence in Joshua's eyes, and was ready for anything.

The fight will bring the heavyweight title a step closer to undisputed status and put the focus even more on American Deontay Wilder, who holds the WBC crown and is undefeated in 40.