Ben Hunt has put the exclamation mark on Matt Lodge's difficult return to the NRL, immediately delivering on his $6 million St George-Illawarra contract with a 34-12 win over former club Brisbane. 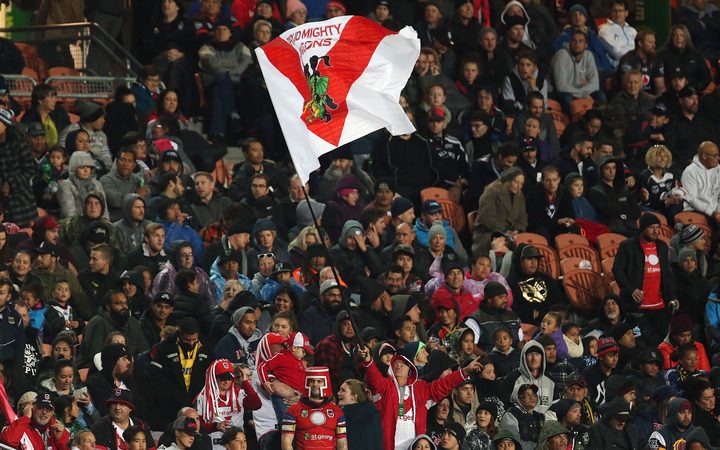 Two of the NRL's biggest pre-season stories collided on Thursday night when Hunt intercepted a Lodge pass in the 50th minute. The No.7 ran half the field to score for the Dragons to take a 16-6 lead.

His intercept summed up the fortunes of both he and Lodge in a dramatic opening to the season at Jubilee Oval.

Hunt set up the Dragons' first try when he grubbered out of dummy-half for the chasing Tyson Frizell, while his long kicking game was equally impressive in the first half.

Just as positive for Dragons fans is the impact he already appears to have on their new-look spine.

Gareth Widdop looked dangerous running the ball in attack, and struck up a nice combination with young fullback Matt Dufty, who was as quick as ever through the midfield and on kick returns.

Hooker Cameron McInees looked improved on last year. He ran freely from dummy- half in the first half to finish with 48 metres from his five up-tempo carries.

Jack de Belin, Jason Nightingale and Euan Aitken each finished with tries for the Dragons in their 50th win at Kogarah as a merged club.

Brisbane couldn't find any cohesion after Jordan Kahu scored the first points of the NRL season for the third year in a row, this time through a penalty goal.

James Roberts scored twice for them in the second half, but the game was as good as gone after Lodge's intercept pass.

The headline story of the past month, Lodge looked every bit the nervous player on return from his two-year exile, stemming from his infamous New York rampage.

Booed every time he touched the ball by the crowd of 14,457, he was whacked by a Frizell shoulder charge on his first run - earning the Broncos a penalty.

However, he was later penalised for a high shot on Dragons prop James Graham, and dropped a pass cold minutes later in the first half as he looked to take a hit-up.