All Whites captain Winston Reid has been at the centre of concerning scenes during the latest round of the English Premier League. 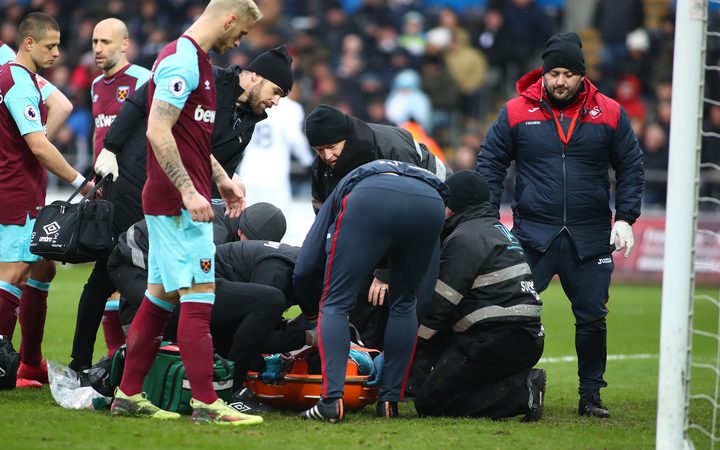 Winston Reid is placed onto a stretcher after a fall during West Ham United's clash with Swansea City. Photo: Photosport

The New Zealand skipper was stretchered off the field in a neck brace and with breathing support, and also suffered a knee injury in a nasty fall in the 27th minute of his West Ham United team's 4-1 loss away to Swansea City on Sunday (NZ time).

After falling awkwardly while attempting to make a tackle close to his won goal-line, Reid received treatment for around 10 minutes on the pitch before he was carried from the field by a swag of medical staff.

The 29-year-old defender was taken to hospital for scans but after the match West Ham manager David Moyes said the head injury was not their primary concern.

"Winston has been knocked unconscious and concussed and it's his secondary injury we're more worried about," he told BBC Sport.

"When he's fallen, he's hurt his knee in some way, and that's our bigger concern. He's in the dressing room and is talking, so he's got no problem that way, but we need to get his knee checked to see exactly what the problem is," Moyes said.

Ki Sung-yueng, Mike van der Hoorn, Andy King and Jordan Ayew all got on the scoresheet for Swansea as they moved above West Ham on the ladder into 13th place.

It was a much more positive day out for Reid's fellow All Whites star Chris Wood.

Making his return after two months out with a knee injury, the striker came off the bench to score the winner for Burnley in their 2-1 victory over Everton.

Cenk Tosun headed home his first Everton goal to put the visitors ahead after 20 minutes.

Ashley Barnes levelled for Burnley, who had endured a 12-game winless run in all competitions, in the 56th minute, and the hosts secured the victory through substitute Wood with 10 minutes left.

Everton's misery was compounded when defender Ashley Williams was sent- off late on for elbowing Barnes.

"It was a thorough performance and winning one," Burnley manager Sean Dyche said.

"We have more to do. Hopefully that freedom in the second half is something we can carry on."

The result marked the first time Burnley have won a Premier League match after conceding the first goal, and took the seventh-placed side to the 40-point mark.

When Egyptian international Salah gave Liverpool the lead after 40 minutes it was his 32nd goal of the season in all competitions and the seventh game in succession that he had found the net.

It was also the 26th competitive club match Salah he has scored in, eclipsing the likes of Paris St Germain's Edinson Cavani (24) and Barcelona's Lionel Messi (20) in the big five leagues.

Sadio Mane added Liverpool's second with his fifth goal in his last three matches, which came after the move of the night with a series of quick interchanges culminating in Roberto Firmino's brilliantly-threaded pass through a seemingly impenetrable forest of legs.

Tottenham warmed up for their midweek Champions League showdown with Juventus by easing to a 2-0 victory over Huddersfield at Wembley, Son Heung-min's double ensuring the north Londoners extended their unbeaten run in all competitions to 17 games.

In other results, Troy Deeney's second half-strike gave Watford a 1-0 win against bottom side West Brom, a last-minute Riyad Mahrez free kick gave Leicester a 1-1 draw with Bournemouth and Southampton failed to ease the pressure on manager Mauricio Pellegrino after a goalless draw with relegation rivals Stoke.