The New Zealand men's sprint team has failed to defend their title at the World Track Cycling Championships in the Netherlands. 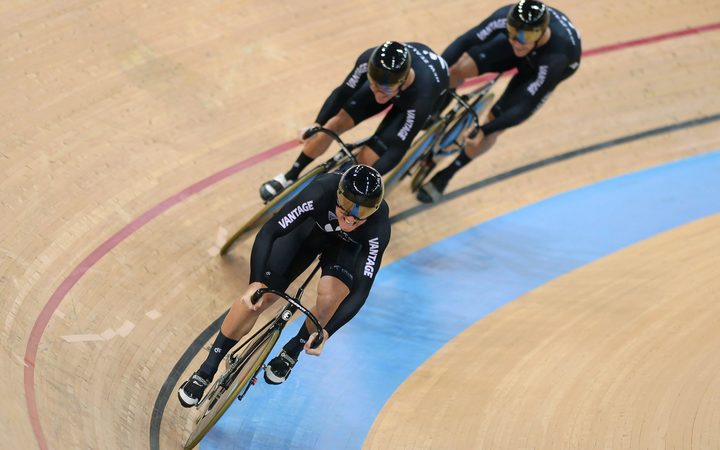 Ethan Mitchell, Sam Webster and Eddie Dawkins never appeared on top of their game throughout their competition.

"The team sprint is brutal and not much has to go wrong from the start for it to snowball and you can get exposed very quickly. Uncharacteristically the boys did not execute a ride close to their capability either individually or collectively.

"There is immense disappointment. They gave it everything but the execution wasn't there."

The men finished fifth fastest in qualifying in 43.736s, topped by hosts Netherlands in 42.869. They could not improve with a 43.434 effort in the first round up against Great Britain who qualified for the gold medal ride against the hosts.

"We also came here to kick on in the competition over the next few days and that's what we have to do is to reset and show what we are capable of in the sprint, keirin and kilo," said Peden.

The Netherlands won the gold, Great Britain the silver and France the bronze.

The three New Zealanders had won a medal at every World Championship since 2012 including three gold medals.

"That was very pleasing and encouraging for the women's programme," said Peden. "They produced faultless rides from both of them and delivered what they are capable of and where they are in the world at the moment.

"That was a sensational fifth in the world which is the highest world ranking for women's team sprint and the fastest they have gone.

Germany went on to win the title from hosts Netherlands with Russia third.

The New Zealand men's pursuit team also missed out on the medal after two rounds of their event and will meet Switzerland in the ride off for fifth.

The New Zealand womens pursuit team were 4th fastest and they will meet top qualifiers the United States in the first round tomorrow with the top two then riding off for gold.