Chosen by schoolchildren across Japan and announced before a gymnasium of cheering pupils in Tokyo, the as yet unnamed blue character will be the mascot for the Olympics and the pink cherry blossom-inspired one for the Paralympics.

"It's quite innovative, I like the blue-check pattern while the pink one uses cherry blossoms and it shows traditional Japan," said Miyu Kawa, a 12-year-old student at Hoyonomori Gakuen School, where the selection was announced.

"These two are very different in design but I think they have quite a unity between them," she said, evoking a theme that resonates well with the Olympic movement. 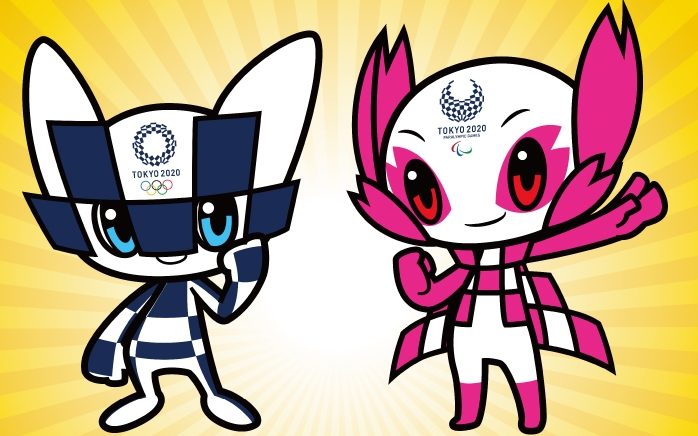 Tokyo 2020 Olympic mascots whose names are yet to be decided. Photo: IOC

Organisers last year received more than 2,000 entries from the general public in a nationwide competition, from which they short-listed three pairs of designs in December.

Students from more than 200,000 classes at around 16,000 Japanese elementary schools took part in the selection process, with each class casting a single vote.

The winning pair, created by designer and illustrator Ryo Taniguchi, received more than half of the total and easily beat the other two pairs.

The country of Hello Kitty is known for its love of all things cute and some of its ubiquitous mascot characters enjoy celebrity status, notably Kumamon the red-cheeked bear and Funassyi, a peach with 1.5 million Twitter followers.

The Tokyo 2020 mascots, whose names will be decided by the same selection panel, will take the torch from their cuddly Pyeongchang Winter Games counterparts Soohorang, a white tiger, and Bandabi, a black bear.

Masaaki Komiya, vice-director general of the Tokyo 2020 organising committee, said the panel expected to announce the names later this year.

"In the meantime we will also have discussions on what kind of goods we will be producing," he said.

Designer Taniguchi will not, however, receive any royalties from mascot-related products because the contest regulations specified that all intellectual rights would go to the International Olympic and Paralympic committees, he said.