An outstanding last quarter inspired the New Zealand men's basketball team to an 87-73 win over China in the Asian World Cup qualifier in Donnguan. 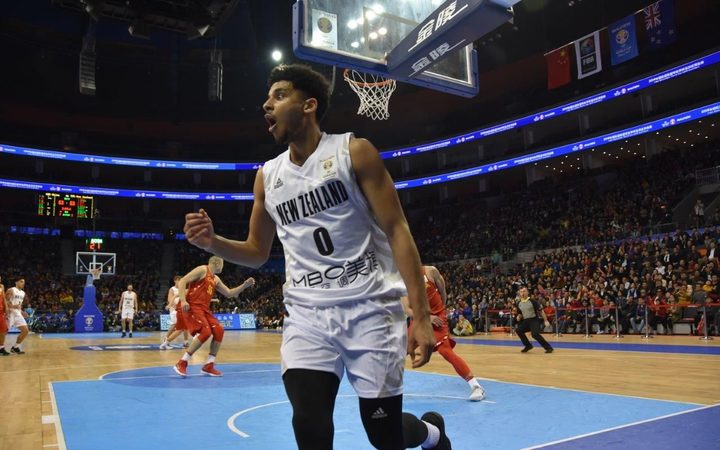 The Tall Blacks trailed by three points entering the last quarter but outscored their stunned opponents 27-15 in the fourth to storm home to victory and inflict China's first loss of the Asian Qualifiers. The triumph has leapfrogged New Zealand to the top of Group A.

The Tall Blacks used suffocating defense to transform the game as they harassed a nervous China into numerous late turnovers. The visitors were brilliantly led in the backcourt by Tai and Corey Webster, who each scored 18 points.

Star center Yi Jianlian was heroic for China with 37 points, including a herculean first-half where he appeared to be the difference between the teams.

The sharp-shooting Tall Blacks continued their hot form from beyond the arc and their strategy of letting China shoot threes worked as the hosts finished a woeful 6-of-22.

Buoyed by their capacity crowd, China appeared set on numerous occasions to blow the game open but a gusty New Zealand resisted the punches during the see-sawing contest. Jianlian utterly dominated the first-half with 24 points, including 3-of-7 from deep, but China led only by one point at the long break.

The momentum swung in a pulsating second half but the gallant Tall Blacks produced huge defensive plays down the stretch to thwart China. Tai Webster stepped up with several big baskets to help deliver one of the sweetest victories for the Tall Blacks in an undoubted statement win.

"Our aim was to play pressure defence for the full 40 minutes and I thought at times we did that superbly. One of the keys was the rotation of players, with everyone coming in and contributing while they were on the floor. The final quarter though, we got some great stops and they crumbled under that pressure. I am immensely proud of the boys. That is a great win in the Tall Blacks singlet."

While China were going to just the two scorers, the Tall Blacks had a variety of players to call on, with Corey Webster (18) and Tai Webster (18) leading the way, with Tai going at a sharp 7 of 13 including 4 of 6 three pointers. The brothers in fact posted near identical stat lines with 2 rebounds and 5 assists apiece.

Alex Pledger (11) and Isaac Fotu (8) were big in the paint, with Pledger in particular making some huge plays in the second half that extend the Tall Blacks lead at crucial moments. Shea Ili had an efficient 10 points on 4 of 6 shooting, while Jordan Ngatai played vital minutes off the bench and sunk both his shots, one a dagger corner three.

Henare always felt his young team was in control, even when trailing by one at the half.

"I knew we would wear them down, our sustained pressure was too much for them. That showed in the final minutes when we continued with high energy on defence and made good plays with the ball. We saw it at the Asia Cup and that is the level that this team has to maintain, our baseline effort has to define who we are as a team, and we saw what we can achieve off the back of that tonight."

The Tall Blacks dominated the final quarter 27-15 to win comfortably, albeit the score does not reflect the close nature of the game, nor the formidable foe that was China in front of a partisan home crowd in Dongguan.

There is no time to rest or celebrate though, the Tall Blacks are travelling immediately to Korea to play the host nation in another crucial game on Monday. With Korea winning in Wellington in November last year, the Tall Blacks will be have a stronger thirst for victory in Seoul and further strengthen their position in qualifying pool play.