New Zealand's speed skaters have backed their race tactics after finishing fourth in the team pursuit at the PyeongChang Winter Olympics. 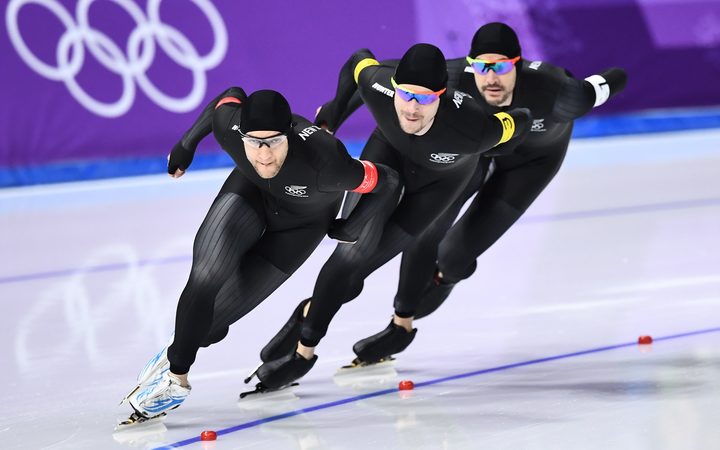 The team of Reyon Kay, Peter Michael and veteran Shane Dobbin fell short of a medal after losing to South Korea in the semi-finals then the Netherlands in the race for bronze.

The trio came out firing in their first race and led for most of the encounter, including into the final lap before the hosts powered home to win by 0.71 seconds.

It was a different story in the minor final against the Dutch, who were led by 5000m gold medallist Sven Kramer - the event in which Michael finished fourth.

New Zealand were sluggish early and could not prevent the loss of ground as they crossed the line 5.14 seconds behind their opponents.

Dobbin admitted there was not much left in the tank for the Dutch but backed their all-or-nothing efforts against the Koreans.

"We decided a couple of days ago that we were going to have a good go at the semi-final," Dobbin said.

"A lot of people expected us to kind of throw it and wait for the bronze medal round. It's just not in us.

"We decided early on that we were going to fight and do everything that we could to get to that gold medal round.

"The semi-final was probably about as good as we could have run. It just happens that the other teams were faster."

Norway took gold more than a second ahead of South Korea after setting an Olympic record against the Dutch.

The speed skating team pursuit, made possible by the 38-year-old Dobbin's decision to come out of retirement two years after Sochi 2014, was considered one of New Zealand's best chances for ending its 26-year Winter Olympic medal drought.

But instead it will go down as another close call, the country's third top- five finish of the Games.

The trio's efforts were substantial given they did not have the luxury of a reserve to ease some of the race burden as other teams did.

"We did expend a lot of energy in the semi-final.

"As it turned out, the results were pretty much as they should have been. The stronger team won."

Dobbin was lured into his third Olympics after strong performances by his teammates.

He said it was worthwhile.

"It's obviously not easy to be away from home. But it's been great," Dobbin said.