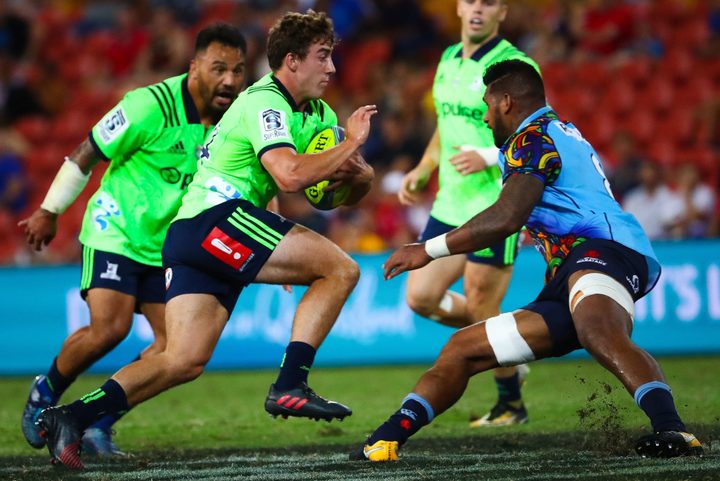 Joshua McKay of the Highlanders runs at Jed Holloway of the Waratahs during the Global Tens Tournament Photo: © Photosport Ltd 2018 www.photosport.nz

It might have only been the Brisbane Global Rugby Tens but the heartbreak was real as a last-gasp try from Highlanders winger Tevita Nabura sealed a 12-10 victory at Suncorp Stadium on Friday night.

The 'Tahs' looked on course to notch the first win by an Australian side over a Kiwi franchise in any format since the opening match of last year's inaugural tens event. An embarrassing 21-0 whitewash in Super Rugby followed.

It looked like the tide might have been turning as NSW backed up their 26-5 victory over French Top 14 outfit Pau earlier in the day with a strong start against the Highlanders, going 10-0 up after tries from Taqele Naiyaravoro and Cameron Clark but they couldn't hold on, conceding two tries in the final three minutes in a deflating finish.

It's still hard to know how to interpret performances at the hit-and-giggle pre- season tournament, yet it appears the 'Tahs are taking it seriously.

Halfback Jake Gordon said they had a "point to prove" after a horror 2017, which included defeats at home to the Southern Kings and Jaguares.

There were similarly mixed results for the other Australian teams on day one.

As expected, Wallabies halfback Will Genia was denied a Brisbane homecoming and not risked by the Melbourne Rebels after suffering a lower back fracture at training.

Instead, a no-name side got off to a bright start in the first match of the day, going 17-0 up over the Panasonic Wild Knights of Japan - but they didn't score another point and lost 19-17 in a stirring comeback from the Robbie Deans- coached side.

The Queensland Reds were smashed 29-7 by the Blues, who topped that by beating the Wild Knights 47-10 - the biggest margin in the tournament's short history.

The Reds looked to have recovered in their second game after a strong opening against the Rebels but twice surrendered the lead to lose 21-17.

The ACT Brumbies clawed from behind to pip Fiji 17-12 in their first game but collapsed 31-7 against the Crusaders at night.

Meanwhile, defending champions the Chiefs picked up right where they left off in the tens format, beating the Highlanders 17-12 before trouncing Pau 31-7.

The Chiefs, Crusaders and Blues are the only unbeaten teams left, while the only losses suffered by the Highlanders and Hurricanes were to other New Zealand teams.