Opinion - Last Saturday I took a break from blogging the on-field action at the Hamilton Sevens. 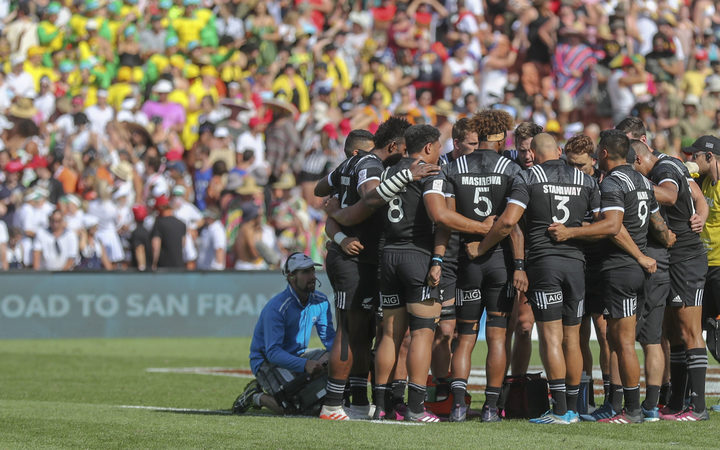 It was a beautiful day, so I made my way down into the stands to have a look at the colour and costumes. It was set up to wander in a loop, through the stands and out the back to the temporary bar area.

There were a tonne of costumes, from Trumps to pregnant PMs, Hungry Hungry Hippos to Bananas in Pajamas. But there was one theme that definitely stood out, even if it's one that you wouldn't have blinked at a few years ago. In fact, it's a costume I almost ended up wearing myself back when the Sevens was in Wellington: Native Americans.

However, it was almost certainly just as offensive to Native Americans to dress in cheap, knock off versions of their traditional dress back then, too.

I went and talked to a couple of costume Indians, who blithely disregarded my concerns: It's just a bit of fun, it's an easy costume, the whole point of the Sevens is that it's not supposed to be PC, they said.

I asked one local wearing a plastic war bonnet what he'd think if a drunk foreigner did a really poor job of dressing as a Māori - 'nah mate, that's different'.

I didn't press the issue, because when the idea had been floated years ago to me I hadn't given it a second thought. Plus it was hot, people had been drinking and I didn't want to start anything. So I kept walking around until I passed the large Whatanoa Gateway that proudly stands above the old Referee's Corner at Waikato Stadium. We were all in the home of the mighty Chiefs, whose logo and jersey proudly display native culture the way it should be - in a sporting sense at least.

Here in Aotearoa we like to think that we've got the whole race relations thing down - at least better than most. But this dichotomy of honouring one native culture while cheapening another was a clear indication that the bar is pretty low.

The Chiefs aren't the only team with that name in the world. Over in the NFL, they reside in Kansas City, where the fans do a 'Tomahawk Chop' to rally the team. However, they aren't even top of mind when it comes to appropriation of native culture in US pro sports. That honour sits with the Cleveland Indians and Washington Redskins. Add in the Atlanta Braves, who may not on the face of it be that offensive, till you remember that they used to have a mascot called Chief Noc-A-Homa.

You want to honor Native Americans? Uplift the actual people and not your version of us. #StillHere #NotYourMascot pic.twitter.com/jUBWgLdFAn

The Redskins defiantly claim that their name 'honours' Native Americans, even laughably bringing in a dubious First Nation representative to backup their claims. All the while collecting profit off the back of a name that's increasingly regarded as being highly offensive.

So far, so racist. It's unthinkable to have a team named and marketed in such a way back here.

As I made my way through the increasingly sunburnt crowd, I thought of the other team named for native people of Aotearoa: the Warriors. Both them and the Chiefs have gone to great lengths to make sure they're in line with Māori protocol, although the Warriors did have to change their logo after their first few years. Turns out the original curved tongued version was the symbol of something that's cursed, which is actually fitting given the team's ongoing inability to win a premiership.

But while they've got their logos and respect for culture right, it isn't exactly perfect. Below and to the side of the iconic Warriors emblem, the jersey is plastered with sponsorship by Sky City casino and Woodstock bourbon. The Chiefs' own jersey hit a snag last year too, when main sponsor Gallagher Group's patriarch Sir William Gallagher revealed himself to have some views on Māori that would've been right at home 100 years ago.

By now I realised, it doesn't actually stop there with the cultural manifestation in local sports teams - and the next one I could think of wasn't even native to New Zealand. The Highlanders might seem like an innocuous nod to the deep south's Scottish heritage, until you realise their logo is a very obvious copy of Mel Gibson's William Wallace character from the movie Braveheart. That is, by the way, a movie that has been derided as one of the most historically inaccurate depictions of history ever filmed - with a statue in Scotland depicting the cinematic version of Wallace attracting scorn and vandalism.

(Just while we're at it: while the Hurricanes name isn't offensive, it's certainly misleading - we have cyclones in this part of the world, not hurricanes.)

I walked past yet another group of Look Sharp-clad Indians before I headed back up to the relative comfort of the air conditioned media room. From there I could see the entire, beautifully manicured field - a sacred space where the All Blacks and Chiefs have performed their fearsome haka. There's very little doubt that those same fans would've stood in reverence of our unique cultural gift to the rugby world.

In the States there are, at least, signs that things are slowly changing. The Indians announced that they're doing away with their outrageous Chief Wahoo logo. Many refuse to refer to Washington as the 'Redskins'. There's an increasing backlash against the trend of music festival goers wearing war bonnets.

Back in Hamilton, memories came flooding back of the most inappropriate costumes I saw over the years at the Wellington Sevens: it's probably a tie between a group of Klansmen or a guy dressed in a prison outfit with 'Rapist' emblazoned across his shoulders. There's little chance of anyone even getting let into the Stadium with something like that anymore, so it shows that things are changing here too.

The risk of being derided as too PC and someone that finds anything to get offended by is high when you're talking about people dressing up in costumes. But I'm reminded of this striking image from a protest outside an Indians game a few years back:

Here's one of those times when the phrase "Only in Cleveland" is actually an understatement. #Cleveland #Indians pic.twitter.com/rFlzrqNz4q

I didn't meet any actual First Nation Americans at the Hamilton Sevens. It'd be nice to think that if they did come, they won't have to look any of the locals in the eye like that.