For the first time, the Philadelphia Eagles are Super Bowl champions. 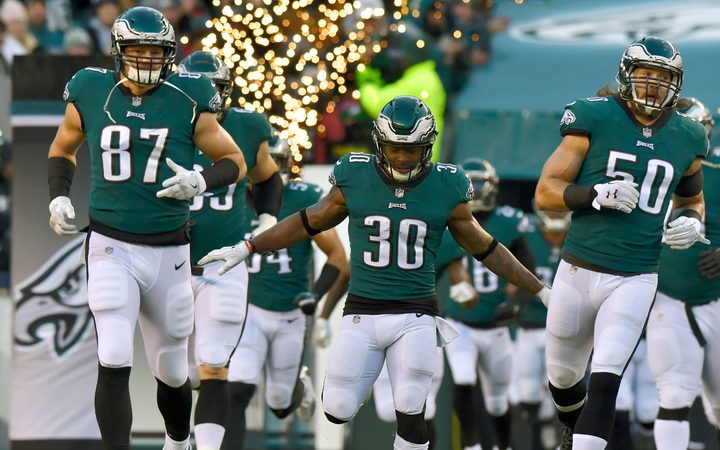 A Hail Mary pass attempt by Tom Brady fell incomplete in the end zone as time expired, and the New England Patriots fell to the Eagles 41-33 on Monday (NZ time) in Super Bowl 52 in Minneapolis.

Jake Elliott nailed a 48-yard field goal with 1:05 remaining to give the Eagles an eight-point edge.

Graham told NBC of the strip-sack, "Just kept going, you know? We said we needed a play. If we got one more opportunity, we were going to give everything we got -- and I just so happened to get there.

"I'm just thankful because we've got a team that's resilient. You know, we're gonna stick around for a long time -- cause we world champs, baby, and it feels so good."

Moments before Graham's key play, tight end Zach Ertz lunged over the goal line for a touchdown with 2:21 remaining, giving the Eagles a 38-33 edge.

On the go-ahead, 11-yard scoring play, Ertz made the grab of a Nick Foles pass at the 2-yard line, then dived in front of Patriots safety Devin McCourty to cross the goal line.

Replay review confirmed the score and prompted Philadelphia to go for a two-point conversion, but the attempt -- a swing pass to Eagles rookie running back Corey Clement -- failed.

Foles finished 28 of 43 for 337 yards with three touchdown passes and one interception. Brady completed 28 of 47 passes for 505 yards and three TDs.

New England surged ahead 33-32 when Gronkowski caught Brady's third touchdown pass of the game, a 4-yard toss with 9:22 left. Stephen Gostkowski's extra point put New England on top for the first time in the game.

The Eagles took a 32-26 lead 51 seconds into the fourth quarter on a Elliott field goal, creating a bit of breathing space after Brady threw two third-quarter TD passes.

The Clement catch was reviewed because he appeared to slightly bobble the ball near the back of the end zone, but the officials ruled that he had both feet inbounds with possession.

Through three quarters, the teams already had set a Super Bowl record for total yards.

A gutsy trick play on fourth-and-goal at the 1-yard line staked the Eagles to a 22-12 halftime lead.

Foles caught the fourth-down touchdown toss from backup tight end Trey Burton. Lined up on the left side, Burton got the ball from Clement in the backfield and threw to a wide-open Foles on the right side.

Clement ping-ponged through the Patriots' defense to set the Eagles up for first-and-goal at the 8, and on fourth down, coach Doug Pederson went for it.

Patriots running back James White plowed through the Eagles' defense to make it at 15-12 game with 2:04 remaining in the half, but New England missed the extra point.

Gostkowski nailed a second field goal to trim the deficit to nine.

Jeffery hauled in a 34-yard score over Patriots cornerback Eric Rowe late in the first quarter to push the Philadelphia lead to 9-3. Elliott missed the extra point.

Philadelphia received the opening kickoff and began the scoring with Elliott punching in a 25-yard field goal to cap the game-starting drive.

New England knotted the score 3-3 with 4:20 left in the first quarter on a 26-yard field goal by Gostkowski.

Patriots wide receiver Brandin Cooks left the game with 12:59 left in the second quarter due to a head injury. He caught a pass over the middle, turned back to run and was hit helmet-to-helmet by Eagles safety Malcolm Jenkins, whom Cooks never saw coming.

Cooks was escorted to the locker room by medical personnel for New England, and he was ruled out for the remainder of the game.

New England trailed 28-3 in Super Bowl 51 last February in Houston but rallied to beat the Atlanta Falcons in overtime.