New Zealand Rugby deny the Warriors captain and Kiwis rugby league star Roger Tuivasa-Sheck is set to switch to codes and join a Super Rugby side next year. 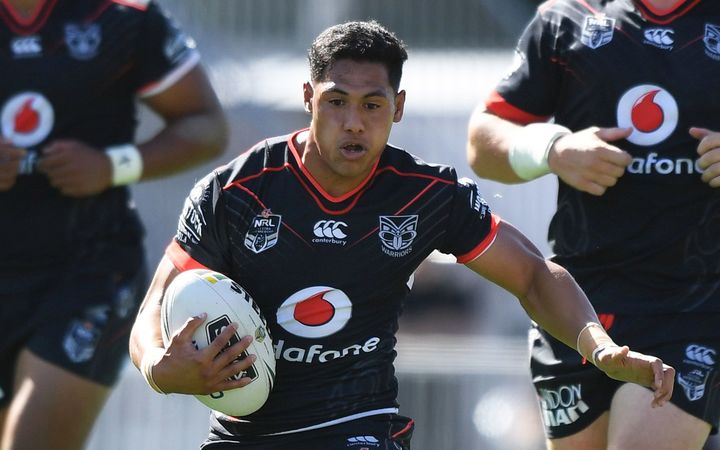 RNZ understands the deal is in the works, with some senior Warriors are aware of the move, despite Tuivasa-Sheck not having told the team.

However New Zealand Rugby (NZR) says they haven't entered formal discussions with Tuivasa-Sheck or his agent.

Last October the Sydney Morning Herald reported Tuivasa-Sheck was in talks with NZR, quoting his agent Bruce Sharrock. Sharrock then denied the claims, telling the New Zealand Herald at the time, "There will be no discussions entered into around Roger's future for at least three months, at the earliest, and his immediate focus is to see what he can do with the Warriors in 2018."

Sharrock maintains that's the case and says he hasn't spoken to the Blues, while Australian media reports have linked the Warriors fullback and captain to the South Sydney Rabbitohs from next year.

It's expected the 24-year-old will sign with New Zealand Rugby and likely the Blues, with the back viewed as a possible long term addition to the All Blacks midfield, where they have less depth than they would like. He would also compete for the outside back spots.

The Warriors captain is off contract at the end of the 2018.

Tuivasa-Sheck has a background in union, captaining Otahuhu College's first XV as well as the school's league team, and played union for the New Zealand Secondary Schools in 2011 before being signed by the Sydney Roosters. Soon after joining the NRL club he expressed his desire to one day return to rugby and chase his All Blacks dream. He's reiterated that stance several times since.

However making the 2019 World Cup would seem a stretch, given he'd only have a season of Super Rugby to get up to All Blacks speed. No other player has risen so rapidly, not even Sonny Bill Williams, who played provincial rugby and the Northern Tour in 2010 before being included in the 2011 World Cup squad. Tuivasa-Sheck could potentially join a Mitre 10 Cup side after the NRL season finishes, especially if the Warriors fail to reach the finals, but it's unclear if he'd be allowed to join a Mitre 10 Cup team midway through their campaign. Williams did something similar in his 2016 return to rugby from league, playing the final two games of Counties-Manukau's season after the Roosters were eliminated from the NRL finals. He did this despite not being contracted to Counties until 2017.

The All Blacks are also blessed for talent in the outside backs. Less so in the midfield, but that's a much harder transition to make having been out of the game for so long.

Blues fans would lick their lips at the prospect of Rieko Ioane and Tuivasa-Sheck lining up in the midfield or outside backs for the Super Rugby side. Wing Ioane, World Rugby's Breakthrough Player of the Year, is another who's seen as a potential All Blacks midfielder.